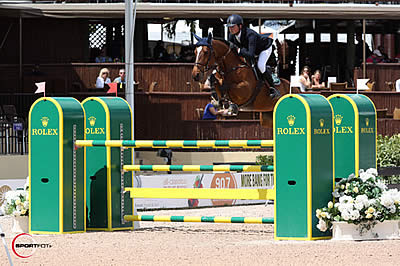 Wellington, FL – March 14, 2014 – Italy’s Lorenzo de Luca and Elky van het Indihof sped their way to an exciting win in Friday’s $34,000 Spy Coast Farm 1.45m on a beautiful afternoon at the Palm Beach International Equestrian Center (PBIEC) in Wellington, FL. De Luca and Elky van het Indihof have had several top finishes at the FTI Consulting Winter Equestrian Festival (FTI WEF) recently and finally got their victory with a fantastic round to beat out USA’s Caitlin Ziegler and Christine.

Showing in the International Arena at PBIEC on Friday, the $34,000 Spy Coast Farm 1.45m saw 41 entries in total with 15 clear rounds. The second entry to show over Richard Jeffery’s (GBR) speed track, Caitlin Ziegler, set a very fast pace in 67.10 seconds with Artisan Farms LLC’s Christine that would hold the lead through most of the class. Not until Lorenzo de Luca entered the ring, third to last in the order with T & L NV’s Elky van het Indihof, did the lead change hands. The pair blazed through the course in 65.98 seconds for the win.

De Luca (26) first got Elky van het Indihof in July of 2013 and has had great results with the ten-year-old Belgian Warmblood mare (Toulon x Thunder van de Zuuthoeve), including wins and top finishes throughout Europe. This was Elky’s first time traveling to Florida for the winter, and she has made consistent improvement with each week of competition.

De Luca was thrilled with the win and praised his horse on an excellent round. “It is nice to finally win a class with her here,” he smiled. “She is fantastic. She is a super fast horse, and she wins a lot. She is so competitive, and she loves the speed classes. Sometimes I try to jump some grand prix classes with her, but she is very competitive in the speed ones.”

“We made 65 seconds,” de Luca said of his time. “That was actually my plan to do 65, because I saw Caitlin go and her horse has a really big stride, but I think my horse is faster on the turns. She is very quick. It was quite a tricky, delicate course, but it was really nice.”

This was Elky van het Indihof’s last day showing this week. She will go to the Equine Conditioning Center for some pampering and then head home to rest up for the last two weeks of FTI WEF competition. De Luca will show his top horse, Zoe II, in Saturday night’s $125,000 Horseware Ireland Grand Prix 3*. Zoe is also already qualified for week twelve’s $500,000 FTI Consulting Finale Grand Prix CSI 5*.

De Luca came to the FTI WEF for the first time last year and explained that this is the first year that he has had some really good horses here. He is from Italy, but has spent the last three years living in Belgium, riding for Neil Jones Equestrian. This year they brought seven horses, some for sale, some for the small classes, and four for the bigger classes. They are stabled with sponsor Tim Collins.

“Mr. Collins has a stable here, so we started the partnership with him last year, and now we are going to keep coming in the winter. It is beautiful to come here,” de Luca noted. “It is a perfect show to go to in the winter. In Europe it is really cold, and we don’t like showing indoors that much actually. This is the best show to make the horses ready for the season.”

“It was quite a shock,” de Luca said of his first trip to Wellington last year. “The level of competition is unbelievable. That is the top level in the world I think. They are the best riders with the best horses, and you just learn a lot staying here. Last year I didn’t have too many horses to compete, but it was a great experience just being here because you meet some people who have always been your idols for a long time. McLain Ward is I think one of the best, Nick Skelton, Laura Kraut… they are all here. Ben Maher – Ben is unbelievable. Scott Brash… I mean, the best are here. It is a perfect way to compete with them and get stronger and learn a lot.”

“You just learn from watching the classes, and the jump-offs are amazing,” de Luca added. “I think last year, when I came back to Europe, I was way better after the three months here because you get better so quickly. Three months here is like one year in Europe to show in the big level.”

After competing in Wellington in 2013, de Luca moved up to jump at the five-star level for the first time and felt confident because of the experience that he had gained.

“When we went back to Europe we got two very good horses,” he explained. “We started to do the 5* Nations Cup with my good mare, and we also got a horse to show at the World Cup in Verona. It was actually very good because then you go there and you are already competitive. If you go there and maybe you have not come here to compete, you try just to get around, but this show makes you so much stronger.”

Nairobi Nights, a 13-year-old Dutch Warmblood gelding out of Ingur B. by Nairobi, placed first, second, and seventh over fences for the division championship. The reserve championship went to Shadowplay, ridden by Gay Peterson and owned by Perry Peterson. Shadowplay and Gay jumped to third and first over fences. The pair was also awarded the Champion Equine Insurance Hunter Style Award for their efforts.

Montross was thrilled to pick up another win at the FTI WEF given the caliber of competition that attends the show. “I’m very happy to have such a nice horse and a great trainer. I love this show. It’s nice to be here the whole season, and to be consistent as well is very rewarding,” Montross said. “I think everybody likes to come here and you get the majority of adult riders. In summertime, people spread out. I think it is one of the more competitive horse shows that we see.”

“He felt very happy. He likes this ring a lot, so he walks right in there and does his job really well. It’s nice I can gallop around, and that’s when he does the best. He was good yesterday in the Rost too, but we really love this ring.”

Montross has owned Nairobi Nights for eight years, and while she is grateful to have such a well-developed bond with the gelding, she acknowledged he was difficult as a young horse. She turned the reins over to trainer Jimmy Torano and hunter professional Holly Orlando before taking the ride back five years ago.

“I would try every once in a while, and then give him back to the professionals. The past five years or so, I’ve had him [to show on my own], and it’s been great,” Montross smiled.

Of Nairobi Night’s development over the years, Montross noted, “He is very quiet in the ring. He puts his ears forward and just goes around. When he’s feeling good, he keeps a nice even pace and he jumps a nice jump. He stays even and has a nice temperament.”

Nairobi Nights has turned into the perfect amateur hunter partner for Montross. While he has a tendency to feed off any nerves he can sense from his rider, Montross can take it all in stride after getting to know the horse so well.

“I think that comes with just knowing him so well, that’s why it’s nice to have a horse for so long that you feel comfortable,” Montross commented.

Showing in the adult amateur hunters has been especially rewarding for Montross, who finds her division in particular to exude an atmosphere of camaraderie.

“[I find that is true] especially here in Florida, because we’re here for the whole twelve weeks. Even the weeks we’re not showing we still come and watch our division. Everyone’s very friendly, especially the 51 and over. We’re all here and having a good time. It’s competitive, but everybody’s enjoying it.”

Competition for week ten of the FTI WEF continues on Saturday in Ring 8 with the THIS Children’s Medal 15-17. For full results, please visit www.showgroundslive.com.