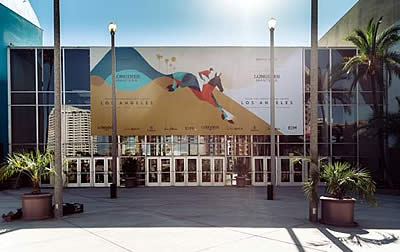 LOS ANGELES (Sept. 29, 2016) – The Long Beach Convention Center opened its doors for the start of the 2016 Longines Masters of Los Angeles, one of the most prestigious equestrian events in the world that brings together the top riders for four days of competition. As the elite-level riders and horses kicked off season two of the Longines Masters Series, guests were treated to adrenaline-charged competition, live entertainment, and a marvelous Opening Gala.

“Today was the kick-off of the 2016 Longines Masters Series and we have hit the ground running,” said Christophe Ameeuw, CEO and Founder of EEM. “We’ve already seen elite-level riding and jumping, and it’s only been one day. Guests can expect the next three days to continue delivering action-packed excitement through equestrian sport. It’s only just the beginning.”

Athletes from around the world competed in the first day of heart-pounding show jumping competition across three levels. In the Olympic-level, CSI 5* Masters class, Emanuele Gaudiano and Guess 6 took home the KTLA Trophy after finishing the course with the winning time of 66.26. Hilary McNerny and Vitesse won the CSI 2* Prestige PRG Trophy, while Hanna Mauritzon and Parkmore won the Engel & Völkers Trophy. Amelie Bitrar and Beirut, and Jessica Sullivan Allen and Little Annie claimed top spots in the first day’s National class events.

During the evening, guests were invited to celebrate at the Opening Gala, hosted by chart-topping rapper and horse enthusiast Iggy Azalea.

Equestrian superstars rubbed elbows and sipped Barons de Rothschild champagne with Hollywood glitterati including actress and rider Kaley Cuoco and Guillaume Canet, and French singer JAIN brought the house down with a live musical performance. Santi Serra also treated guests by demonstrating the beauty and grace of the horse’s movement with one of his famous Sercam Shows, a performance of natural dressage that exhibits the relationship and trust between human and animal.

The 2016 Longines Masters of Los Angeles will continue over the next three days at the Long Beach Convention Center. The jam-packed weekend includes the La Martina Polo Exhibition, more live music, dressage demonstrations, and much more.

Open throughout the event, the Prestige Village offers the ultimate shopping experience, showcasing the equestrian tastes and styles from the world’s leading luxury brands. Longines, the Title Partner and Official Timekeeper of the event, will present the Official Watch of the Longines Masters of Los Angeles, the Longines DolceVita Steel and Gold. Guests can discover this timepiece and many others in the Longines Boutique located in the Prestige Village. Between classes, spectators have the opportunity to browse Jonathan Adler’s equestrian-chic home style and exquisite handbags from Mark Cross, the oldest American luxury brand and original saddle maker. Sam Edelman launched a limited-edition Masters Collection of ballerina flats, drawing the crowds to their pop-up in the Village.

Additional exciting sports that are still to take place include the Longines Speed Challenge, the Emirates Gold Cup, the Pro-Am for Charity, and the main event: Sunday afternoon’s Longines Grand Prix.