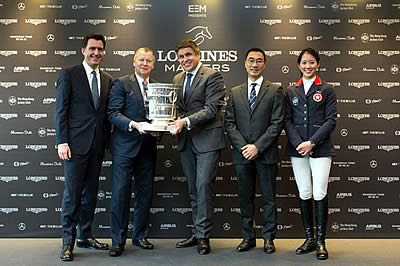 The last leg of the tri-continental Longines Masters Series which opened in Los Angeles in October and continued to Paris in December promises to be Asia’s social event of the year and ‘place to see and be seen’.

With Germany’s Marco Kutscher and Van Gogh having won the opening round at the Longines Masters of Los Angeles and local hero Patrice Delaveau powering Lacrimoso 3 HDC home in the Longines Grand Prix in Paris, the competition between the world’s top show jumpers is now wide open for the last leg in Hong Kong. A repeat of his Paris win in Hong Kong will earn the French star a Bonus of 500,000 euros, leading him on his way to win the Masters Grand Slam Super Bonus, while Marco Kutscher could collect a 250,000 euro bonus for two non-successive victories.

But there’s much more to this prestigious international competition than world-class showjumping.

The 6-star level event is also a chic highlight of Hong Kong’s social calendar with Hong Kong’s high-society out in force at prestigious ringside dining tables at the VIP Masters Club by 2 Michelin-starred Chef Yves Mattagne.

Iconic French house DJ duo Cassius will take centre stage at the Prestige Village on Saturday night Feb. 20 for an exclusive after party.

Luxury boutiques include an elegant showcase whereby Longines, the Title Partner and Official Timekeeper of the event, will present the Official Watch of the Longines Masters of Hong Kong, a model of The Longines Master Collection. The Spanish fashion house Massimo Dutti and the luxury Chinese brand Shanghai Tang, will also present their latest collections.

Designed to appeal to the whole family, there is a ‘Kids Village’ to entertain the youngest ones, while celebrity-watchers will be on the lookout for some of Hong Kong and Asia’s most prominent household names and stars, including Longines Ambassador of Elegance, Aaron Kwok.

Also this year, the Hong Kong Jockey Club, founding partner of the Longines Masters of Hong Kong, will introduce the Horse Pavilion for riding enthusiasts of all ages. The Horse Pavilion consists of three stables that will provide the people of Hong Kong with a rare opportunity to interact with the heroes of the sport – the horses.

The HKJC is pleased to welcome some of the biggest names in equestrianism to the HKJC Master Classes. For the fourth consecutive year they will be providing the very best in coaching to selected members of the Hong Kong Jockey Club’s Junior Equestrian Training Squad (JETS).

At the official press conference in Hong Kong, Mr. Fabien Grobon, Managing Director of event founder EEM, said: “We’re looking forward to a fantastic last leg of the international series at AsiaWorld-Expo. After three successful editions of the Longines Masters of Hong Kong, it just gets bigger and better; it is firmly established among the most prestigious events in Asia, providing an avant programme of sporting excellence, elegance and the best of lifestyle and show jumping. This glamorous annual sporting and social event continues to attract record-breaking attendances.”

He also reminded Christophe Ameeuw’s quote, Founder and CEO of EEM: “Our vision was to reinvent show jumping and appeal to the whole family at the same time. So it’s also a celebration of entertaining riding competitions among local Hong Kong jockeys, along with Master Classes in riding and autograph sessions, with a glamorous cocktail of attractions at the Prestige Village and lively DJ after parties to complete a fantastic night out after the competitions end. For the first time in 30 years, Polo will return to Hong Kong and will take place on Saturday February 20th for the Shanghai Tang Polo Cup Tournament. On top of that, for the first time outside of Macau, Franco Dragone’s “House of Dancing Water” will perform an exclusive show on Sunday February 21.”

“Like previous editions, we’re confident it will be a huge success, attracting more than 20,000 visitors as the event continues to inspire public interest in equestrian sport, and enhances Hong Kong’s reputation as Asia’s ’Equestrian Capital’.”

“On behalf of EEM, I’d like to thank all of the partners of the Longines Masters of Hong Kong; especially the Title Partner and the Official Timekeeper, Longines; our Founding Partner the Hong Kong Jockey Club; the Hong Kong Equestrian Federation; Massimo Dutti; Mercedes Benz Hong Kong; HKT – The Club; TVB Pearl; Shanghai Tang; Airbus; and everyone else who has contributed to the continuous success.

Vice-President of Longines and Head of International Marketing Mr. Juan-Carlos Capelli said: “As Title Partner and Official Timekeeper, we’re delighted to partner this prestigious international series. This innovative concept combining excellence in showjumping, entertainment and elegance keeps going from strength to strength. It really has caught the imagination of sports lovers in all three great world cities. What we see now is the culmination of ten years of commitment to bring equestrian sport into the international spotlight. We could not be here without the wonderful support of the Hong Kong Jockey Club, and thanks to them, Hong Kong is truly the equestrian capital of Asia.”

As well as the Longines Grand Prix, Longines also partners with the Longines Speed Challenge, the only speed competition of its kind in the world with an identical course over all three legs, from Los Angeles and Paris to Hong Kong.

The Hong Kong Jockey Club has been a Founding Partner of the Longines Masters of Hong Kong since 2013, and JP CEO Mr. Winfried Engelbrecht-Bresges said: “All of us at The Club are delighted to continue our support for this highlight of our showjumping calendar here in Hong Kong. It’s a glamorous counterpart to our world-class horse racing and I’m sure the horse-loving Hong Kong public will enjoy it immensely. We’re actively trying to encourage this noble aspect of equestrian sport. We saw a big rise in popularity following Hong Kong’s huge success staging equestrian events for the 2008 Beijing Olympics. And in close co-operation with the Hong Kong Equestrian Federation we’ve since created an infrastructure and committed significant resources to establishing a Club-sponsored Equestrian Team, with our riders achieving considerable success on the international stage.”

The Club is also hosting the HKJC Race of the Riders, with several top jockeys facing the unfamiliar challenge of a showjumping course. The four jockeys – Derek Leung, Neil Callan, Vincent Ho and Joao Moreira – will be pairing up with the top showjumpers in an entertaining team relay competition.

One outstanding graduate of the Club’s training is Jacqueline Lai, Hong Kong’s representative rider at the Longines Masters of Hong Kong this year.

Hong Kong’s first national champion rider, who struck gold at the 2009 China National Showjumping Championships in Beijing, said: “I’m so proud to be representing Hong Kong at the Longines Masters in front of my home crowd. It’s the first major event of my career riding against the top showjumpers in the world in Hong Kong, so it’s obviously a great privilege. These are my heroes and I really can’t believe I’ll be competing in such stellar company. It’s a bit like being an unlikely qualifier in a World Cup final, to be honest. But I already feel like a champion just by being there. It really is a great, great privilege and I’m so excited… and so are my family and all my friends here!

Co-partnering the event is the Hong Kong Equestrian Federation, and President Mr Michael Lee said: “The Hong Kong Equestrian Federation is dedicated to advancing the sport of equestrianism in Hong Kong, so it a great honour to participate in the Longines Masters of Hong Kong, which is one of our eventing highlights. Longines has done so much for the sport over many, many years, and their dedication and contribution also provide us and our riders in Hong Kong great motivation to strive. May I also express my appreciation to all of our Judges, stewards and volunteers for their tireless efforts contributing to the advancement of equestrian sport in Hong Kong.”

To access official pictures of the Press Conference: http://we.tl/rXoXvQ4bjy.

Tickets for The Longines Masters of Hong Kong 2016 can be purchased at: www.longineshkmasters.com or http://venue.cityline.com.

Official Trailer for The Longines Masters Series 2015-2016 ‘We Ride the World’: https://youtu.be/DGtw5rkV2Fo

The Ride of My Life web series: http://www.longinesmasters.com/en/masters-tv