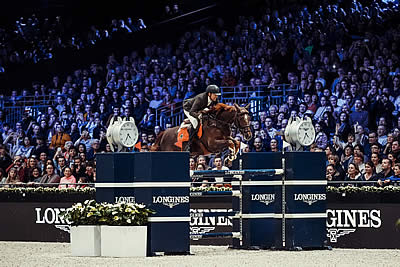 What better present for the organizer and the public of the 11th Longines Masters of Paris than this 100% French podium? In front of their fans, French team stalwarts Simon Delestre, Kevin Staut, and Roger-Yves Bost took first, second, and third, respectively, in the Longines Grand Prix of Paris. Believe us, there was noise – a lot of noise! – in the stands while history was made in the arena.

“Fair,” “perfectly balanced,” “definitely sport and welfare oriented.” A lot of praise went towards French course designer Grégory Bodo’s tracks during the press conference. “The course was interesting and faults occurred everywhere as opposed to a true stumbling block which would have penalized a certain type of horses in particular. Grégory did a very subtle job forcing the riders to ride forward which one of the basis of our sport.” Coming from reigning team Olympic champion Kevin Staut, second of this Longines Grand Prix of Paris, these words were certainly honey to the ears of Bodo who is very much in demand in the horse world and whose courses raise unanimous appreciation wherever he operates. “The tracks of the Longines Grand Prix of Paris and all the weekend’s classes of this 11th Longines Masters of Paris required fluidity, delicacy, accuracy, and rhythm. I nonetheless included two turns to give the competitors a chance to take risks.” Did it mean that the Longines Grand Prix of Paris was to be won on the flat and not over the jumps?

“A champions’ class”
“Hermès Ryan is naturally very fast on the ground,” confirmed the winner Simon Delestre. “I did actually win on the flat and stuck to my plan as far as related distances were concerned but turned very fast. This was a big Grand Prix. Going last in a six-strong jump-off was a rather comfortable position to be in.”

“Walking the course, I really thought that this was going to be a champions’ class and that the winner would be really strong,” added Roger-Yves Bost, third of the Longines Grand Prix of Paris, the other reigning Olympic champion on the podium. “I had to risk it all, take off strides… I knew that the rockets Staut and Delestre were going to be hot on my heels. I haven’t ridden very many jump-offs this fast with Sangria. I’m really pleased with her.”

As far as final placings go, the three French leaders are followed by Ireland’s Darragh Kenny on Classic Dream, France’s Félicie Bertrand, the only lady rider to have qualified for the jump-off of this Longines Grand Prix of Paris 2019 on Sultane des Ibis, and Germany’s Christian Ahlmann riding Take A Chance On Me Z.

55 000 spectators over four days
Christophe Ameeuw, president and founder of EEM, organizer of the Longines Masters of Paris and the Longines Masters Series (Hong-Kong, Lausanne, Paris), commented that this Grand Prix perfectly reflected the sport, passion, and boldness which prevailed in Paris-Villepinte over the weekend. “This 100% French podium is the perfect conclusion. An event like ours must absolutely serve the sport and keep bringing on to new fans the best showjumping has to offer. During this weekend, we have experienced historical moments and kept our good spirits despite external constraint. We also innovated with the introduction of a new competition for the best ponies in the world as our duty is to always challenge ourselves, fly high, experience new things, and pursue our ideas. There is still some way to go and many people have yet to discover this sport which, to my eyes, is the most beautiful in the world. Therefore, we need to cross community borders and create new fans. This actually was one of the bets of this youth oriented 11th edition.”