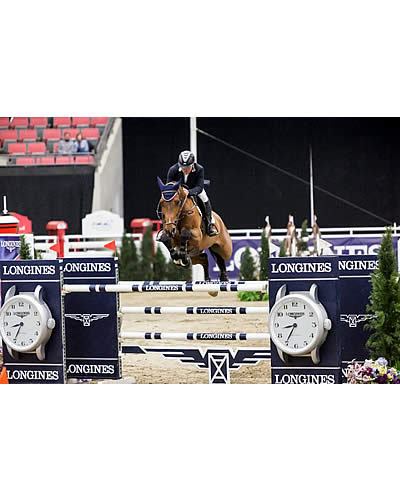 October 30, 2015, Calgary, Alberta: It was a special night in Calgary on Saturday as the inaugural $132,000 Longines FEI World Cup™ Jumping Calgary 1.60 m took to the floor of the Agrium Western Centre. The long-awaited event – one of four World Cup qualifiers in Canada this year – lived up to the hype as only three riders went clear on Werner Deeg’s challenging course in Round One.

In a tension-filled showdown, it was Parot, the man who “doesn’t know the meaning of the words ‘going slow’,” who emerged with his second North American League triumph of the 2015 campaign. In typical bold style, Parot and Atlantis found the speed in the course with a clean round in 39.23. The win boosted him to top spot in the East Coast standings with 40 points.

“Atlantis was calm in the first round, but he got a little more excited in the jump-off. But he’s a good horse.”

In second was the remarkable Candele, who rode Granit S as a catch ride, completing an unlikely story with a second-place finish in 41.58 seconds. “John has been trying to bring me here to ride for a long while,” Candele said afterward. “Our schedules worked out this time. We had a chance to ride on the flats early this week. It’s the sign of a fantastic horse that he put his heart out and accepted my riding tonight.”

Third was the former Olympian, Henselwood, who’s had a consistent Royal West meet with multiple trips to the podium. Her excellent showing came after a late switch to Farfelu from her usual mount. “This is supposed to be a horse for a 19-year-old Canadian who is in engineering at Queens University with a full course load. So I had Farfelu. That tuned out to be great planning.”

John Anderson, the host at Royal West, who came fifth, was satisfied at having such a great event in his hometown. “I was ecstatic that it all came together after some tough months for my family with the death of my father J. C. This event helped me get through that. This shows we can pull this off in Calgary. I hope to have the Longines event back here many times in the future.”

Added Henselwood, “What a great thing that John’s done to bring this event to Calgary. It really boosts out ability nationally to come up the rankings for the World Cup.”

Lisa Carlsen of Calgary was top local rider aboard Worlds Judgement. “The course was very technical, very fast and some of the jumps came up very quickly. Werner did a great job of setting a challenging test.”

Points won on Saturday count toward the final of the Longines FEI World Cup™ final to be held in Gothenburg, Sweden next year.

Earlier in the day, Elizabeth Gingras nabbed the $7,500 Hotel Arts Open Jumper 1.30 m aboard her Floreen SFN. In second was Brian Morton on Cartoon. Third-place honours were won by Vanessa Mannix on Dooley’s Deluxe.

About Royal West:
Hosted by Rocky Mountain Show Jumping, Royal West is the heart for equestrian competition. Over ten days at the Agrium Western Events Center at Stampede Park, Royal West features both international and national events with over half of a million dollars in prize money handed out throughout the tournament. The tournament hosts the Longines FEI World Cup™ Jumping Calgary, the Spirit of the West Cup, the Royal West International Championship, Western Canadian Hunter Derbies and when applicable the CET Medal National Finals.