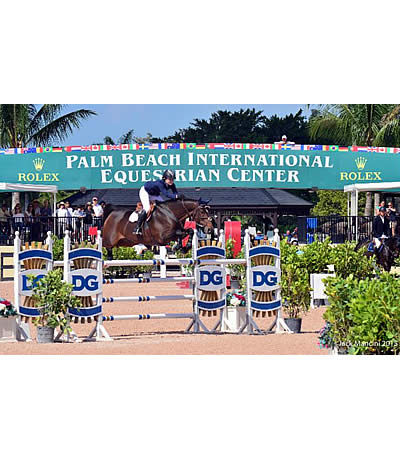 Wellington, FL – November 3, 2015 – Liza Finsness of Wellington, FL piloted her own Shiver to a win in the $25,000 ESP Fall Finale Grand Prix hosted on Sunday, November 1, at Palm Beach International Equestrian Center (PBIEC) on the final day of the 2015 Equestrian Sport Production Fall Finale competition. Finsness and Shiver finished the class as the only clear trip in the jump-off round, crossing through the timers in 50.36 seconds. Daniel Zetterman of Sankt Olof, Sweden finished in second aboard LB Carwyn, owned by Gyllebo Farm LLC, dropping a rail in the jump-off round and finishing with a time of 46.448 seconds. Heather Caristo-Williams of Wellington, FL and Cosmopolitan 30, owned by Holly Caristo, were the fastest four-fault round, which would earn them third place recognition. Competition at PBIEC continues this weekend with the ESP “Regional” competition (Nov. 7-8).

Finsness, a junior at University of Georgia, found herself incredibly pleased with the performance of Shiver, a 2005 Hanoverian gelding (Stakkato x Germina), who has continued in work with her trainers Chris Ewanouski and Federico Sztyrle while she has been focused on school for majority of the year. The duo also collected a second place finish in the $10,000 Open Stake during ESP Fall Finale earlier in the week.

“We’ve had him for almost three years now and since we’ve gotten him he’s grown so much. He’s an incredible horse and I love riding him. He can be a bit hot but he’s really calmed down over the past few years,” said Finsness. “He’s so incredible to jump and the feeling when we’re in the air is like nothing else. I think we trust each other now and that has been really important for us. He doesn’t mind that I haven’t been riding as much, but at this point it’s like riding a bike. He gives me so much confidence when I can come back from school, hop on, and be competitive in a class like that.”

Going head-to-head against last week’s champion Daniel Zetterman, Finsness followed as the second ride in the jump-off round and knew she needed to capitalize on Zetterman’s single rail aboard LB Carwyn. She explained, “I went after him in the jump-off and I knew that we really needed to ride clean, so I tried to keep it as tight as possible. I made sure to focus on giving him a good approach to every fence and even though he [Zetterman] beat my time, I just wanted to make sure that I went clean.”

With a strong plan in place to tackle the jump-off, Finsness looked to her trainers Sztyrle and Ewanouski for guidance, as she knew leaving every rail in the cups would earn her the win. She commented further, “Before the round I was really only focused on going clean. Every time I come home and ride him I really rely on our experience together and his ability to get the job done. When I walked the course I thought it was very solid. It was a good height but not too big and it was challenging. It was a great course for Shiver and there were a lot of turns where we were able to make up time and the result was exactly what we were looking for.”

“My plan for the next couple of months will be to come back for breaks and try to do well during the winter circuit. I want to try and do a lot of WEF dependent on my schedule,” she noted. “My trainers have done an incredible job at keeping Shiver going while I’ve been at school and I’m so thankful for the hard work. It is really paying off.”

Viggo Bjorklund of Garsnas, Sweden earned top honors in the $10,000 Open Stake during ESP Fall Finale aboard his own Abu Dhabi Gold with a time of 46.072 as the only double-clear effort in the four horse jump-off round. Liza Finsness of Wellington, FL and Shiver finished in second place, crossing through the timers in 48.072 seconds with four faults. Bjorklund also piloted Flecu, owned by Gyllebo Farm LLC, to a top three finish, collecting five faults around the jump-off track and completing the short course in 50.149 seconds.

Miranda Green and her own The Good Knight reigned in the Children’s Pony division presented by the Wanderers Club as the duo picked up Champion recognition for the division. Riley McKesson of Loxahatchee, FL and Libby Lou Who owned by Emilee Arrington were awarded with Reserve Champion honors. McKesson and Libby Lou Who also earned Wanderers Club Children’s Pony Circuit Champion honors.

Competition will continue at PBIEC next weekend with the ESP “Regional” show hosted from November 7-8. For more information and a full list of results from ESP Fall Finale, please visit www.pbiec.com.