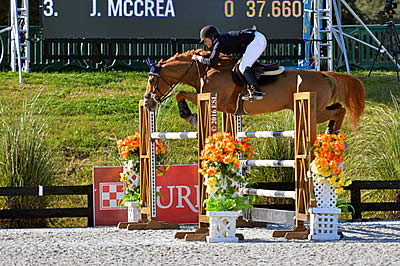 Ocala, FL (February 20, 2016): Lisa Goldman and her own Morocco have been owning the leaderboard this winter at HITS Post Time Farm. Goldman is certainly no stranger to the winner’s circle, with multiple Grand Prix wins under her belt during the 2016 Ocala Winter Circuit. This week’s win marks the Hawthorn Woods, Illinois equestrian’s third time to win the $25,000 SmartPak Grand Prix this year. Goldman also garnered third place to claim two spots in the top five.

Irish course designer, Alan Wade, built a nice introductory course for the week that rode fast and created excitement in the stands. Ten horses and riders returned to the ring for the jump-off with eight going double-clear. With placings divided by mere seconds, the need for speed was the top priority to contend for the blue-ribbon title.

Germany’s Andre Thieme and Cellisto, owned by Markus Fuchs, set the tone for the jump-off, clocking in fault-free in 37.234. Unfortunately for Thieme, his lead was short lived as Goldman aboard her own mount, Hindsight, sped through the course, going clear with a 36.298-second round to move to the top.

Another clear round came next, for Canadian Kyle Dewar and his own Russell. They crossed the timers in 39.723, not quite fast enough to top the prior trips but good enough to eventually earn them seventh place. Matthew Williams and Cuchina attempted the course next. They would be clear to add to the group of fault-free rounds, but the slower time of 43.723 put them behind the field and they would finish in tenth place.

Christian Heineking and NKH Calango clocked in clear but still could not overcome Goldman’s lead. Jonathon McCrea and Zerly followed Heineking, crossing the timers in 37.663, just one second behind Thieme’s round for the eventual fifth place.

Goldman returned to the ring on her second jump-off mount, trusted winning companion Morocco. They shaped the corner from the vertical coming home to the mid-course combination, shaving time off the clock with the tight turn. Another turn to the home stretch line quickened the pace as they sped through the timers in a blazing fast 34.780, moving ahead of her own round on Hindsight to take the lead.

Australian Thomas McDermott knew he had to be quick and clear to edge out Goldman. He and Airtime Z GHP galloped through the course, chasing Goldman’s time with their eye on the prize. They put in a precise round in 36.068, not enough to top Goldman’s winning score, but enough to move into second place.

Heather Caristo-Williams and Cosmopolitan 20 were the last team to test the jump-off. They finished fault-free in 38.641, putting them in sixth place.

“It was a really fast class, the footing was great and it was a lot of fun to ride in,” said Goldman. “I knew I had to be quick because there were some very fast ones behind me.”