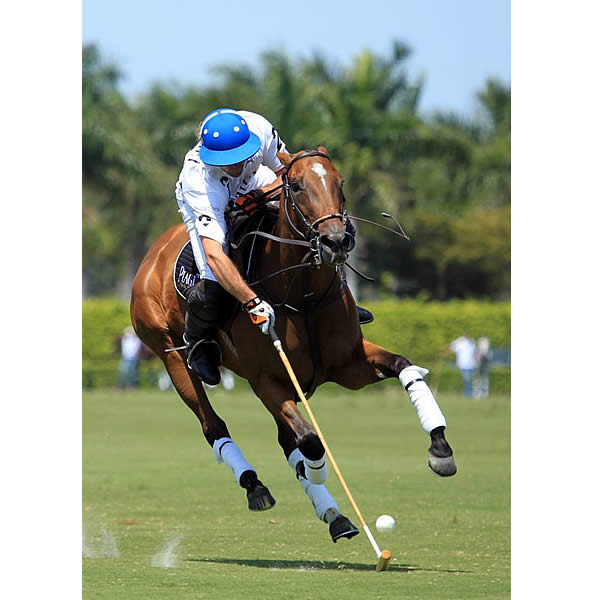 Piaget team captain Melissa Ganzi suffered a severe groin pull, according to trainer Jeremy Fedoruk, in the fourth chukker and was forced to leave the game.

Ganzi tried to return to the game but was replaced by 17-year-old Lorenzo Merlotti, a senior at Palm Beach Central High School who was watching the game on the sidelines. It was his 26-goal debut after playing two 20-goal games earlier this season for Crab Orchard.

Grand Champions Polo Club-based Piaget opened the game strong with a 3-0 lead in the first chukker with goals from the team’s two 10-goalers Sapo Caset (two goals), and Miguel Astrada (one). Piaget missed a penalty shot late in the chukker.

“The first half I felt we should have been up by three or four and we weren’t,” Piaget coach Joey Casey said. “I thought we outplayed them the first half and I thought things would go in our favor a little bit in the second half but it didn’t happen.”

Lechuza Caracas started chipping away at the Piaget lead behind Polito Pieres and Juan Martin Nero.

Lechuza Caracas outscored Piaget, 3-1, in the second and third chukkers and went into the half with a 6-5 advantage.

“We started strong and then after halftime I thought we were going to do really well, but then had a bad fourth chukker where they dominated,” Casey said.

Lechuza Caracas scored another three goals in the fourth chukker to increase its lead, 9-6, late in the chukker before Caset converted a penalty goal to cut their lead to 9-7.

Lechuza Caracas scored three consecutive goals for a 12-7 lead before Astrada lofted an amazing 90-yard shot to score in the final seconds of the fifth chukker.

Piaget continued to mount a charge early in the sixth chukker, closing the gap to 12-10 on a big neck shot goal by Caset and again to 13-11 on another amazing Caset neck shot with 2:28 remaining.

But Lechuza Caracas and its lightning-quick horses seemed to have an answer for every Piaget goal.

“In the fifth chukker we did some really good things, but every time we would score they would answer with another one,” Casey said. “We just couldn’t get ahead. We came back strong again in the beginning of the sixth for the first four minutes.

“We would play really well and then we wouldn’t play well and they would score two or three goals,” Casey said. “After Melissa’s injury, Lechuza started back on fire. They came out on fire and killed us. They made a couple goals – boom, boom, boom. It felt like then we were desperate trying to catch up and over running some plays.”

“We started very strong but then they had a very good fourth chukker,” Astrada said. “They had good horses that chukker and played very well. Then Melissa got hurt. Melissa was playing really well and we lost the momentum.

“We had to re-organize the team and it was tough even though we did better in the last chukker,” Astrada said. “They are a great team with good horses and good organization. It is difficult to beat them.”

For Merlotti, it was an opportunity of a lifetime to go from watching a U.S. Open game to playing one.

“I wasn’t really nervous but it felt good definitely,” Merlotti said. “The horses felt great. The adrenaline is crazy when you play this kind of polo.

“It took me a while to get used to the game,” Merlotti said. “I didn’t really have to warm up, I guess because I am so young. As soon as I got on the field I was already into it. The players told me to have fun, don’t stress it. Victor has really fast horses; it was really hard. I could have been better – maybe next time.”

Ganzi hopes to return to the lineup for this week’s game against Alegria on Friday. She will undergo extensive physical therapy and is day-to-day.

“We won’t know how serious Melissa’s injury is until Sunday,” Casey said.

“We’re still in it,” Casey said. “We have two tough games left but we’ll regroup. Hopefully, we will win one of those games and get back in it. Anybody can win on any given day.”

There are three brackets. Audi is in bracket one with Coca-Cola, Zorzal, ERG and Valiente. Piaget is in bracket two with Faraway and Orchard Hill. The third bracket is Lechuza Caracas, Alegria and Zacara.

The U.S. Open Polo Championship, first played in 1904 at Van Courtland Park, celebrated 100 years in 2004. It is one of three major polo tournaments worldwide along with the British and Argentine Opens. It is also the third jewel of U.S. polo’s 26-goal Triple Crown that includes the C. V. Whitney Cup and USPA Piaget Gold Cup.

The next eight U.S. Opens were hosted by Retama Polo Club in San Antonio where Memo Gracida won the first of his record 16 wins. In 1987, the U.S. Open was played at El Dorado Polo Club in Palm Springs. The next four were played at Horsepark in Lexington, Ky.

Since 1996, the U.S. Open has been held in South Florida. In 2005, Julio Gracida added to the Gracida family’s combined record of 36 U.S. Open Polo Championship wins.