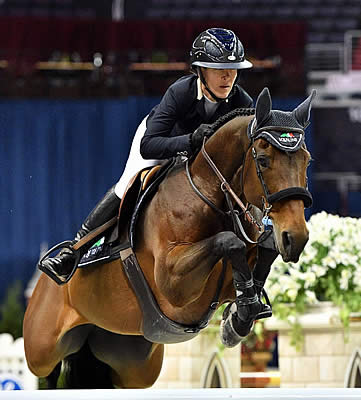 In Thursday’s $35,000 International Jumper Welcome Stake, presented by CMJ Sporthorse LLC, course designer Alan Wade (IRL) set for 29 entries with seven clear rounds over his first round track. Callan Solem (USA) and Horseshoe Trail Farm LLC’s VDL Wizard chose not to return for the jump-off and finished in seventh place. David Will (GER) and Centin Güngor’s Cento du Rouet were first to go over the short course, finishing fifth with four faults in 34.67 seconds. Alison Robitaille (USA) and Bertram and Diana Firestone’s Ace were next to go, jumping a double clear round in 38.00 seconds to eventually finish third. Shane Sweetnam (IRL) and his own and the Blue Buckle Group’s Cobolt dropped two rails in 36.94 seconds to end in sixth place. Next to go, Amanda Derbyshire (GBR) and David Gochman’s Lady Maria BH were double clear in 37.92 seconds to take a brief lead. Laura Kraut (USA) jumped into fourth place with her time of 38.54 seconds riding St. Bride’s Farm’s Confu. Last to go, Lauren Hough (USA) and The Ohlala Group’s Ohlala clocked the winning round in 35.27 seconds.

Hough first partnered with Ohlala, a 12-year-old Swedish Warmblood mare (Orlando x Cardento), five years ago and last competed at WIHS in 2012 when the pair won the $32,000 International Open Jumper faults converted class. At that time, Hough had been riding Ohlala for just one year and was stepping the mare up to the grand prix level with high hopes. Ohlala has since lived up to great expectations and won major classes all over the world.

Explaining her decision to return to WIHS after a three-year hiatus, Hough said, “I am really trying to concentrate on the World Cup qualifiers. I would like to go to the World Cup Finals with her this year, and so I decided to do a tour here. I did Tryon last week. I will go back to Europe to go to Doha next week and then carry on to Toronto.”

“She is wonderful. She loves to win,” Hough said of Ohlala. “I think her favorite part was the prize giving today. Indoors obviously suits her, being a small horse. I felt in the jump-off I did what I needed to do without taking too much risk, and still keeping Saturday night in the back of my mind and having a good prep for that. I feel like I have left enough in the tank to try to win again on Saturday as well.”

The pair will compete in Saturday night’s $130,000 Longines FEI World Cup™ Jumping Washington, presented by Events DC, so Hough did not want to take too much risk in the jump-off.

“She is naturally very quick, so I just rode my round and kept the turns a little bit short,” Hough detailed. “I made quite a short turn into the double and she did that great. Then I still took my time to the last. I didn’t leave out, but just her natural rhythm and the pace she carries over the ground made my job very easy.”

Hough added, “We bought her the end of her seven-year-old year and she has won her whole life. She jumps at a very high level, and I have been concentrating a lot on Nations’ Cups, so it is nice to let her go enjoy it a little bit and be able to go fast.”

“I love America, and I love riding here. I am very lucky to have the opportunity to compete all over the world and be based in both places, but it is always really special to be back in America in front of a home crowd,” Hough acknowledged. “This is a great horse show. In the nighttime they get great crowds, and to be in the middle of D.C. is something special. I know they try really hard, and I like to support good American shows.

The $35,000 International Jumper Accumulator Costume Class, presented by the Gochman Family, was held on Thursday evening during the show’s always-popular Barn Night, presented by Dover Saddlery with the generous support of The Peterson Family Foundation and National Harbor. Local young riders and horse enthusiasts attended in groups and had the chance to enter contests, win big prizes, and enjoy a fun, horse-filled evening that included the WIHS Shetland Pony Steeplechase Championship Races, presented by Charles Owen, and internet sensations Dally & Spanky.

For the win, Kraut and her mount, Stars and Stripes’ Andretti S, cleared the course and the high side of the joker fence for a 65-point total in the fastest time of 44.47 seconds. Kraut was awarded the Crown Royal Trophy, donated by Crown Royal, as the winning rider, and Andretti S earned the Sue Ann Geisler Memorial Trophy, donated by the Washington International Horse Show, as the winning horse.

Dressed as Little Red Riding Hood for the costume class, Kraut had a great time competing in front of the Barn Night crowd and was proud of Andretti S for his great performance. The 11-year-old Dutch Warmblood gelding (Corland x Animo) has shown at WIHS three times and thrives in the atmosphere at Verizon Center.

“He has been really good. He started out the year fantastic in Florida,” Kraut detailed. “Then we had an accident; he fell at a water jump, and it took him a little while just to get his confidence back. He never did anything bad, but he just was nervous. Sort of starting at the Gold Cup he has gotten better. He always seems to like that show, and he has been going well again, and he has been very consistent.

“For some reason he loves Washington,” Kraut added. “He is a claustrophobic-type horse. He doesn’t like other horses coming towards him, but I think this is the third year I have brought him here and he always does well, so it is fun. I am happy with him.”

The $2,500 Low Junior/Amateur-Owner Jumper speed class, sponsored by The Strauss Family, was held on Thursday afternoon with a one-two finish for 17-year-old Isabel Ryan of Locust Valley, NY. Ryan rode Heritage Farm, Inc.’s Levistano 2 to victory and finished second riding her own Abilitydance.

For the win, Ryan was awarded the Beagle Brook Farm Perpetual Trophy. This was her first time winning at WIHS since riding ponies, and her first trip back to the show in three years. In 2014, she started riding with Andre Dignelli at Heritage Farm and just started doing the jumpers last year.

“It was a good return (to WIHS),” Ryan admitted. “My horses were so good. I was really happy because Billy (Abilitydance) is younger, and he was perfect. He really listened to me, which I was worried about. Levi (Levistano 2) was amazing. He was fast, but I was able to get him back really easily, and that was the goal going in. They were both amazing.”

Ryan first started showing Levistano 2 in the jumpers last year and learned quickly with an experienced partner in the 14-year-old Holsteiner gelding (by Levisto). Abilitydance is a newer partnership, but the 11-year-old Dutch Warmblood gelding (by Orame) has also given the young rider great experience.

“I’m fairly new to the jumpers, and I first got Levi because he is older and very experienced,” Ryan detailed. “He was my first real jumper. I started with him at the Winter Equestrian Festival (WEF) this year in the Low Junior Jumpers and then I slowly moved up. Billy was actually my equitation horse last year and then we switched him to the jumpers in week two of WEF this year. He has been getting used to this job, and he was amazing.”

It was a different experience competing on a horse in the jumpers compared to Ryan’s last experience at WIHS on ponies, but her horses gave her two great rounds.

“It was a little nerve-wracking, especially because the last time I was here I was jumping 2’3”, so that was a big difference,” Ryan acknowledged. “It was really nice to have Levi because I have a lot of confidence in him, and I knew that even if it wasn’t the most competitive round, at least he was going to help me have a nice, good experience at Washington. With Billy, my main goal was just to have a nice round and be clean because this is a big step up from anything that he has done before, so it was a great experience showing here.”

WIHS was Ryan’s last show before heading down to the Winter Equestrian Festival in Wellington, FL for the winter show season. She is a senior in high school and recently submitted applications to colleges. She plans to continue riding as much as possible.

The $5,000 High Junior/Amateur-Owner Jumper speed class, sponsored by Staysail Farm, was held during the evening session with a win for 18-year-old Eve Jobs of Palo Alto, CA riding her own Sandor de la Pomme. The pair was awarded The “Footloose” Perpetual Trophy in remembrance of Ruth Ellen Wilmot, donated by The Curtin Family in honor of 1990 winner “Footloose.”

Twenty-four entries showed in the speed competition with just eight clear rounds. Katherine Strauss and All In led with a time of 52.88 seconds, but were pushed to second place in the end as Jobs crossed the finish line in a time of 50.16 seconds. Alexandra Pielet and Co-Pielet LLC’s Helene Ve finished third in 54.62 seconds.

Jobs was competing at the Washington International Horse Show for the first time on Thursday and had great confidence in her mount, a 14-year-old Belgian Sport Horse gelding (Vigo d’Arsouilles x Darco) that she has ridden for two years. The pair also won the Junior Jumper Championship at the Devon Horse Show earlier in the year. Jobs has trained with Missy Clark and John Brennan at North Run in Warren, VT for the last six years and will take a gap year to continue her riding in 2017 before heading to college at UCLA in September. For now, the rider will enjoy a hard-won victory in the challenging competition on Thursday.

“These are my really good friends, and I know that a lot of them are very fast riders. I did not get to watch much, so I was a little intimated walking in there of course,” Jobs admitted. “I think because my horse had such a big stride I was able to do the nine strides down the second to last line, and then the six coming home, which I don’t think many people did. That is probably where I picked up the most time.”

Speaking further of her mount, Jobs said, “This horse is so special. Everything that I have done has been because of this horse. He has taught me an exponential amount. He is truly one of the best horses I have ever ridden.”

Jobs’ main goal this year was to compete in the major equitation finals, and she will also show in the WIHS Equitation Finals this week, starting with the hunter phase on Friday. She then heads to the CP National Horse Show in Kentucky to conclude the season. She will begin competing as an amateur at the Winter Equestrian Festival in Wellington, FL starting in January.

Commenting on her first experience at WIHS, Jobs stated, “All of the horses were wonderful. I think the show is a lot of fun. I think the atmosphere is unlike anything I have ever been to. It is a small ring, but the track rode really nice, and I am very happy with my first day.”

The Washington International Horse Show continues on Friday with the championships for the Junior Hunter divisions as well as the hunter phase of the WIHS Equitation Finals. The Low and High Junior/Amateur-Owner Jumpers will have jump-off classes in the afternoon session. The evening session begins with a $50,000 International Jumper Speed Final, followed by the $25,000 International Jumper Puissance, presented by The Boeing Company. For full results, visit www.wihs.org.