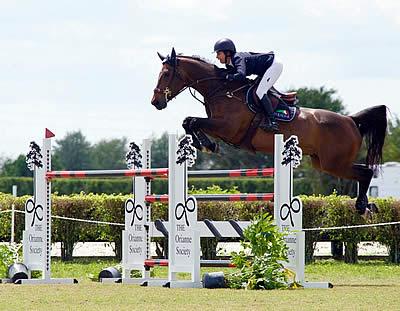 Wellington, Florida (March 22, 2017) – In another outstanding week of competition on The Ridge Palm Beach Series, US Olympic Team Gold Medalist Laura Kraut bested a large field of Grand Prix competitors to capture victory in the $15,000 1.40m Turf Tour Grand Prix, held on St. Patrick’s Day, March 17, 2017. Celebrating the greenest holiday of the year with a day of show jumping on the verdant grass field at Carben Farm in Wellington, Florida, Nona Garson and George D’Ambrosio welcomed Low, Medium, and High Schooling Jumpers, 1.25-1.30m divisions, and the 1.40m Grand Prix as part of their centerpiece series, the Turf Tour. Envisioned as utopian throwback to old world show jumping on the grass, the Turf Tour is the highlight event of the Palm Beach Series, which hosts 13 weeks of competition from January through April 1. Full divisions of hunter and jumper classes run at Jim Brandon Equestrian Center in tandem with the Turf Tour, Hunter Derby Days, and USEF Equitation Tuesdays events each week, Wednesday to Sunday, to create the entire Palm Beach Series experience. During this, the second to last week of full competition, some of the best riders in the industry as well as juniors, young riders, amateurs, pony riders, and aspiring professionals, trotted through The Ridge’s ingate to test their skill over courses in a variety of levels and divisions.

The technical yet versatile course set by FEI ‘O’ course designer Leopoldo Palacios yielded a total of 9 first round clears and four double clears. Ireland’s Daniel Coyle aboard Susan Grange’s Farona and Canada’s Jaclyn Duff with her own Pater Noster went double clear to finish second and third, but no one could catch Laura Kraut and Deauville S, owned by Old Willow Farm, who streaked around the course to capture the win on a jump off time of 35.014.