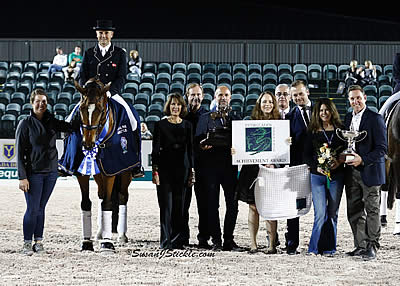 Wellington, FL (March 10, 2016) — After riders competed under the lights at the Grand Prix Freestyle during the Palm Beach Dressage Derby CDI-W at the Adequan Global Dressage Festival, Everglades Dressage, the title sponsor of the Derby, rewarded first place winner Lars Petersen with the Everglades Dressage Rider Achievement Award. Rose and Bethany Peslar, the mother/daughter duo who own and run Everglades Dressage, were proud to once again sponsor such a significant event in the dressage community, and to reward Petersen for his victory.

Rose and Bethany Peslar have had a tremendous influence on the growth of dressage in Wellington, Florida that dates back to before the Adequan Global Dressage Festival even existed. As soon as the idea for the Adequan Global Dressage Festival was born, the Peslars were quick to step in as founding sponsors of the international winter show series. Since then, they have carried on the tradition of being the title sponsor of the Palm Beach Dressage Derby and presenting the Everglades Dressage Rider Achievement Award throughout each show season.

Endel Ots, a trainer based at Everglades Dressage, explained, “To sponsor the Adequan Global Dressage Festival is extremely important to the Peslars. They are very supportive of all of the riders here, and they will continue to give their sponsorship and support in the future.”

One way that the Peslars show their support is by presenting the Everglades Dressage Rider Achievement Award. This award is given to admirable riders who demonstrate significant achievements in any aspect of dressage. After Petersen’s recent performance in the FEI Grand Prix Freestyle, it was clear that he well deserved the award.

Petersen, a Danish rider with an impressive resume of international competition, scored a 78.025 percent in the Freestyle with his self-owned Danish bred mare, Mariett. Their closest contender was fellow Danish rider Mikala Gundersen on My Lady with a 75.700 percent.

“It always feels good to win, but this win was especially good because it was after Marriett has been showing for two weeks in a row – which, for all of us, is a lot,” Petersen explained. “But, she was really fresh going in and it was really fun. Everything came together.”

To accomplish this feat, Petersen’s strategy was simple. “She’s just been kept loose and happy, and that’s the most important thing,” he said. When asked about what’s on the horizon for him and Marriett, Petersen’s response was equally simple: “I take it one day at a time.”

For now, he’s perfectly content with his recent accomplishments – including his recognition from Everglades Dressage. Everglades Dressage, in turn, is happy to continue supporting immensely successful riders like Petersen and all riders who have a love for dressage.

At the Palm Beach Derby, Rose and Bethany Peslar were also honored themselves with the Premier Equestrian Award, presented by Premier Equestrian, for their contributions and dedication to the sport. The Peslars are happy to play such a role in the Wellington dressage community, and look forward to continuing to present the Everglades Dressage Rider Achievement Award throughout the remainder of the 2016 Adequan Global Dressage Festival.