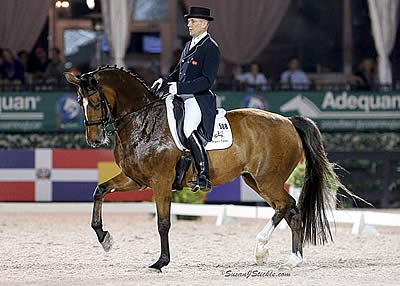 Fellow Danish rider Mikala Gundersen and My Lady finished in second with a 75.700%, while Katherine Bateson-Chandler and Alcazar represented the United States in third place, receiving a 73.450%.

Petersen and Mariett have been working towards their big score all season long, as Petersen has discussed getting back into a rhythm with the 1998 Danish Warmblood mare (Comeback II x Zendi). After enjoying most of the 2015 season off after AGDF competition concluded, Petersen and Mariett seem to be peaking at the right point in time as Danish riders are still looking to fill their four-member squad for the 2016 Olympic Games in Rio de Janeiro, Brazil.

The pair performed a balanced and energetic test, which judge at C, Gary Rockwell (USA), commented may have been the best freestyle routine he’s ever seen the pair perform. Petersen was quick to praise the seemingly ageless mare on her efforts in the ring, which earned them a score near the 80% mark.

“It always feels good to win. This was two weeks in a row for her to show and it’s, I think on all of the horses, a lot, but she was really fresh,” said Petersen. “It was a fun night.”

“For Mariett, it’s very important that she stays fresh. That is my main goal with her. She’s not the easiest horse in the world, but tonight, you know, I’ve had some good tests this season and more not so good. I was just determined,” continued Petersen.

It is always a question of how Petersen keeps Mariett in such fine shape to compete and his plan is very simple: keep her loose and keep her happy. Detailing his preparation this week, it is clear that the more relaxed Mariett stays throughout the week, the better she performs.

“Last Saturday she had off. Sunday she hacked out. Monday and Tuesday we rode her in the field. Wednesday we jogged and then on Thursday, Melissa, my wife, and I did a little bit of test riding on her before and that was it since the last week. She’s just been kept loose and happy. There’s not too much more I can teach her, I don’t think,” he explained.

Gundersen and My Lady have dominated the circuit again this season, but their test tonight could not match the fellow Danish combination of Petersen and Mariett. Gundersen opened up about a moment of distraction, which led her to forget the first moments of her test.

“The pilot didn’t remember where to go tonight. I started going the wrong way, and I lost my focus a little bit. I was not riding the way I normally ride the test and I will say that,” commented Gundersen. “On the other hand, I’m so proud of this second place. I’m really happy that Lars won tonight. It was so important that he got a really good score tonight, as we’re still trying to get the fourth spot for the Olympics. I’m very happy for my second place tonight.”

Originally vying for a position in the FEI World Cup Finals competition to be hosted in Gothenburg, Sweden in April, Gundersen announced that she and My Lady will forego the opportunity to compete in the competition, and instead turn their sights to Rio de Janeiro.

“I had a long talk with my trainer last night and we’ve decided that, while originally we were trying to qualify for the FEI World Cup Finals, we will not go. We’re going to try to focus on earning a spot on the Danish team for the Olympics,” expressed Gundersen, when asked about her upcoming plans with My Lady. “We want to save Lady for that. Now that we’ve changed our plans for that, I may come back to ride the last CDI here for the Grand Prix Special, because we have not done one yet this season.”

The only American pair to sit in the top three in the freestyle, Bateson-Chandler and Alcazar have also been steadily improving throughout the season. Typically based in England during the remainder of the year, Bateson-Chandler finds importance in basing in Wellington, FL for the winter months.

“He was quite nervous in the warm-up, and he’s been pretty solid the past couple of times I’ve gone under the lights. It threw me a little bit in the warm-up, but he came into the ring and actually is learning that’s his safe place and he settles,” she said. “He’s still a green horse and is getting used to having more atmosphere, which is why I keep putting him into more ‘under the light’ situations. He keeps stepping up to the plate, and I’m really proud of him.”

Bateson-Chandler has been careful to not overwhelm Alcazar this season with CDI competition, but feels that the more spaced out competitions give the pair a strong opportunity to improve and gain experience.

“It’s a long season here and you can get greedy with so many international shows. I have taken a couple of CDIs off, so he’s going to do the last two that are here because they’re spread out a bit more,” she noted.

Judge at C, Gary Rockwell (USA), who will also sit on the panel for the 2016 Olympic Games in Rio de Janeiro, noted the several combinations that seemed to struggle in the nighttime atmosphere, but praised Petersen for his accurate and forward ride.

“I was a little surprised that a lot of horses were electric tonight and it’s pretty far into the season. It seemed to have been a really electric atmosphere tonight,” commented Rockwell. “I was very pleased though with Lars’ ride. I thought it may be one of the best tests I’ve ever seen him do with this horse. He made so many wonderful transitions, which we love to reward when we see them. He pulled them off tonight very well, and to me, it was a very quality win.”

The Palm Beach Dressage Derby is a staple for the dressage community each season, and has been a part of the winter circuit in south Florida for nearly three decades. Everglades Dressage is a key sponsor in the success of the AGDF circuit. Representative Endel Ots sat on the press conference panel to discuss the importance of dressage in Wellington.

“Everglades Dressage, with Bethany and Rose Peslar, has sponsored dressage here in Florida for two decades and to sponsor the Adequan® Global Dressage Festival (AGDF) is super important to them. They want to continue to support the sport and the riders here every year,” noted Ots.

Title sponsor Adequan® has brought the competition to new heights in 2016 and continues to play a major role in the overall success and growth of the largest dressage circuit in the western hemisphere.

“I really enjoyed the fans (in the grandstand). As the riders were going down and acknowledging the applause, and it really was like a wave of applause. How cool is that to see? We are just thrilled that we can have a little piece in making this a special place for dressage in this country and the world,” noted Allyn Mann, representative for title sponsor Adequan®.

In what has become a tradition at AGDF, a number of owner awards were distributed throughout the night, recognizing performances at both the national and international levels of competition, each sponsored by Adequan®. Rocking Diamond S, owners of Bismark J, were awarded with the AGDF 7 National Show High Score Award, as Bismark J and rider Melissa Fladland earned 78.409%. Joanne Troat accepted the Prix St. Georges Owner Award for the performance of Belissima 23, ridden by Neve Myburgh (GER), where the duo earned a 71.474% for the win. Marcia Pepper accepted the Grand Prix Freestyle Owner Award for Petersen’s win aboard Mariett. Petersen’s groom, Mallory Brown, accepted the Groom’s Initiative Award, presented by Thomas Baur on behalf of Mark Bellissimo and Equestrian Sport Productions, LLC.

Juan Matute, Jr. (ESP) and Dhannie Ymas, owned by Yeguada de Ymas S.L., took top honors in the FEI Intermediaire I Freestyle, presented by Peacock Ridge Farm, with a score of 74.917%. Katharina Stumpf (AUT) and her own For My Love, earned second place with a personal best score of 71.583%. Christer Egerstrom (CRC) and his own Bello Oriente finished in third place, scoring a 69.833%.

Competition at AGDF continues tomorrow with the FEI Grand Prix Special, presented by Today’s Equestrian and Diane and George Fellows, at 9:45 a.m., followed by the Palm Beach Dressage Derby Exhibition at 1 p.m. For more information on AGDF, please visit www.globaldressagefestival.com.