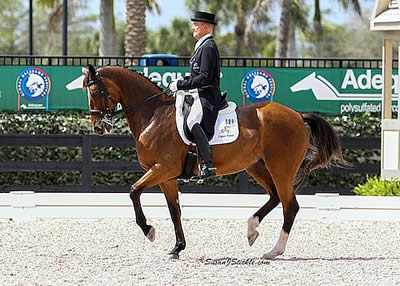 Wellington, FL – March 5, 2015 – Lars Petersen (DEN) and the always-incredible Mariett topped another FEI Grand Prix in 2015, winning the Adequan® Global Dressage Festival Week 9 Palm Beach Dressage Derby FEI CDI-W Grand Prix presented by Everglades Dressage. The humid weather played a major role in the outcome of performances, as the temperature was well into the 80s by early morning. Petersen and Mariett topped the class with a 72.960%, followed by Laura Graves (USA) and Verdades in second with a 72.200%, and Shelly Francis (USA) and Doktor rounding out the top three receiving a 72.120%. The competitive class saw the top four riders all within one percentage point of each other. Tomorrow’s highlight class, the “Friday Night Stars” FEI Grand Prix Musical Freestyle, presented by Everglades Dressage, will begin at 7 pm.

Petersen and Mariett have had a stellar season so far as they aim toward the Reem Acra FEI World Cup Finals in Las Vegas this April. They continue to show their consistency as each competition week passes, clearly in their best form to date. “She did everything I asked, which was good. She was definitely more tired today than in the past which made this test different from our previous rides,” Petersen noted.

The hot weather did impact the duo, as they were in the last five rides in the class, right in the heat of the afternoon, as was Laura Graves and Verdades. “Today it was very hot. I was happy with her because I warmed up for a little bit too long considering the heat, and I had to work for it a little bit today,” said Petersen.

Graves agreed with Petersen and commented that the humid afternoon impacted Verdades test as well. “We definitely felt very similar to what Lars was saying. We felt super tired, and it was not ideal conditions. We’re very used to going early in the morning when it’s a bit cooler,” she said.

Graves and Verdades are testing the competition waters for the first time this 2015 season after their impressive performance at the Alltech FEI World Equestrian Games (WEG) in Caen, France this past August with Team USA. The duo, who placed fifth individually in the Grand Prix Freestyle at WEG, are looking forward to another successful year of competition, as they too aim for World Cup Finals in Las Vegas.

“He tried really hard for me today and we had a few rider errors, which is on me getting back into the swing of competing again, riding the whole test and finding the rhythm,” she remarked. “We’re going to do the World Cup qualifier next week and then we will see. There’s been some discussion about maybe coming out for Nations Cup, but that’s yet to be determined. Making it to World Cup Finals is a priority. We would love to go to Vegas and hopefully we’ll get there with scores tomorrow night in the Freestyle and next week.”

Both pairs will contest the “Friday Night Stars” FEI Grand Prix Freestyle tomorrow night, which will make for an extremely exciting class with a great atmosphere. Petersen continues to dominate the series with several wins, but Graves and Verdades have the scores to make for a very interesting night of competition under the lights.