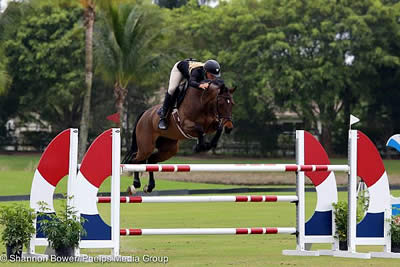 Wellington, FL – January 15, 2015 – Vast green polo fields created the perfect backdrop for the start of the second week of The Ridge at Wellington’s Turf Tour.

Competition in both rings remained strong throughout the day on Wednesday, January 14. While the weather remained overcast for most of the morning, the sun peeked out during the afternoon to highlight a beautiful set of courses that rode well for the competitors. The Grand Prix field saw riders from 8 a.m. until the sun began to fade around 5 p.m. The second ring stayed quite busy until the medium jumpers finished up in the mid-afternoon. The show saw almost 130 trips, significantly growing from week one of the Turf Tour.

Kristen VanderVeen rode Bull Run’s Faithful, owned by Bull Run Jumpers, Inc., to the top of the standings in the first $2,400 1.3-1.35m jumpers. VanderVeen was very pleased with her new ride on the mare.

“She’s brand new, so it’s only the second time we’ve shown. Last week we did her at the first stop of the Turf Tour, so I’m really happy,” VanderVeen said. “She’s a little spicy so I’m getting used to her, but she’s a gamer in the ring. It’s really nice here; the ground is so solid I don’t feel like we’re going to have any trouble.”

Jeffery Welles finished second on Triton Ventures Farms Inc.’s Calais, finishing less than a tenth of a second behind Faithful. He was also fourth on Herbert Sambol’s Broken Heart.

Andrew Welles rode his own Quickly 3 to a third place finish. Andrew spoke very highly of the Turf Tour.

“It’s a fantastic facility and a great opportunity to do something different with our horses. I think it’s fantastic that we get to come and jump on grass, not just grass but a facility like IPC is just phenomenal for the horses,” Andrew said. “I’m planning to come back on Friday. The horse I did had a nice little break after doing well in the grand prixs in December so this was his first week back.”

The second ring saw plenty of action throughout the morning and early afternoon. The first class of the day was the low jumpers, won by Sarah Wayda on Rene Johnson’s Josephine, out of a very competitive field of 29.

The second division was the medium jumpers at 1.2-1.25m. Paul Yanke continued to build on his successes from last week, claiming first aboard Equinvest’s Lady Sparkle and second on his own Carle. Sarah Wayda had three horses in the ribbons, riding Rene Johnson’s horses Maximus and Artemis to finish third and fifth respectively. She also rode Rian Miller’s Contentus to sixth. Fourth went to Unik De Vergne, owned by Nicolas Paillot and owned by Anne Caroline Valtin.

Friday’s events promise to be exciting, with the $15,000 1.4m Grand Prix running from 8 a.m. through 4:30 p.m. Beginning at 8 a.m., there will be both child/adult and masters jumper classes, along with a classic round for both divisions, running concurrently with open cards until noon.

The Jr/AOs will start at 12:30 p.m. and run until 4:30 p.m., with both the regular class and classic card open concurrently. The $3,000 Junior and A-O Jumper Classic is NAL pointed. High schooling jumpers will also be offered with cards running concurrently.

Week two of the Ridge at Wellington’s Turf Tour is taking place at The International Polo Club, located at 3667 120th Avenue South in Wellington, FL 33414. The show entrance is off 120th Street between Lake Worth Road and Pierson Road.