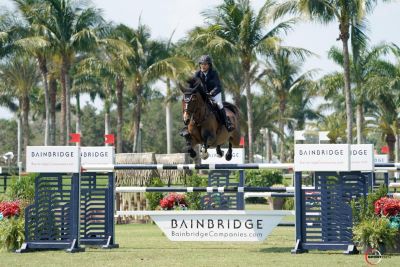 A total of 44 horse-and-rider combinations set out over the opening-round track designed by Catsy Cruz (MEX) and Andy Christiansen (ECU) that featured 16 jumping efforts. The field was narrowed down to just 11 pairs qualifying to return for the jump-off over a shortened track. Sharn Wordley (NZL) was the trailblazer as the first to return aboard Verdini D’Houtveld Z, owned by Lauren Balcomb, posting a double-clear effort and the time to beat of 41.90 seconds. His time in the lead was short but sweet as the next entry moved up to the top of the leaderboard as Enrique Gonzalez (MEX) rode Chacna, the horse he co-owns with Alice Lawaetz, to a clear round in a quicker time of 40.05 seconds.

The lead changes continued from there as Paris Sellon (USA) produced a clear round aboard Anna Jo, owned by Willow Grace Farm, in 40.95 seconds, but it was Olympic champion Laura Kraut riding Baloutinue to answer all the questions asked in the quickest time of the day. The Olympic team gold-medalist guided her new mount, an 11-year-old Hanoverian gelding by Balou du Rouet x Landor S, across the finish line with a double-clear effort in an impressive 40 seconds flat.

A field of 50 horse-and-rider combinations challenged the opening round with just four pairs qualifying to ride the final jump-off track of the week set by Catsy Cruz (MEX) and Andy Christiansen (ECU). A total of three entries elected to return, including Kenny with two different mounts. First to go, the ninth-ranked rider in the world guided Idalville D’Esprit, a 13-year-old Belgian Warmblood gelding by Carabas van de Wateringhoeve x Nabab de Reve, to a clear effort in 42.68 seconds.

After a short break to warm up his next mount, Kenny came close to beating his own leading time with Scarlett Du Sart Z, owned by Vlock Show Stables, LLC. He and the 11-year-old Zangersheide mare by Stakkato de hann x First Bride left all the jumps up in 43.37 seconds to slide into second.