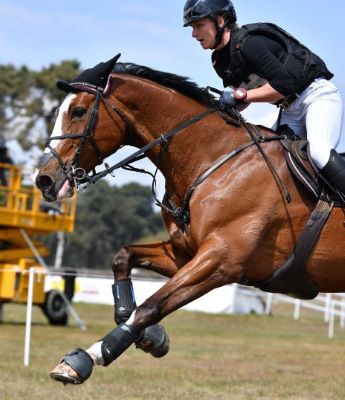 Already at the top of the provisional classification at the end of the dressage in front of a French peloton, Germany’s Julia Krajewski, reigning Olympic team vice-champion (behind France), retains her leadership at the end of the cross country. A cross country that she puts her signature on, associated with her Selle Français Amande de B’neville, without any penalty. Five other couples finished “maxi”, including the Frenchman Karim Laghouag on Triton Fontaine, who thus climbs back to third place with the fastest time in the test. Between them, Thomas Carlile and Birmane remain in the second position which they already occupied at the end of the dressage.

On Sunday, this 35th edition of Saumur Complet ends with the CCI 4*-L Equi Action show jumping course from 2:30pm. Julia Krajewski will have to aim for a clear round if she wants to win the competition. Live broadcast on SC Sport (www.saumur.org).

“I must admit that I am very happy and above all very proud of Almond de B’neville. You have to realize that the CCI 4*-L de Saumur Complet is the most difficult competition in which she has participated in her entire career. She is eleven years old, and I am making her progress little by little. We have recently taken a step forward, since the retirement of Samourai du Thot in fact. On today’s cross country, I was careful at first, but because of the attention I paid to each technical element, it caused me to be a little behind on the clock. It could have been tight but in the end, the mare very easily made up between 12 and 15 seconds in the last five minutes, without being forced. This confirms what I already knew about her qualities as a galloper. She came back very fresh from this cross country. It bodes well for tomorrow then. Almond is an excellent jumper, but anything can happen. I keep my fingers crossed.”