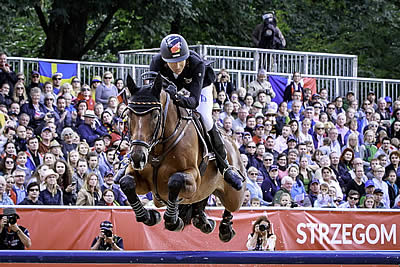 The scene is set for a titanic battle for the Longines FEI Eventing European Championship, held for the fifth time at the much-loved German venue of Luhmühlen from 29 August – 1 September 2019.

The German team is notoriously hard to beat on home ground – they dominated the medals here in 2011, as well as at Malmö (SWE) in 2013 and Blair Castle (GBR) in 2015 – but surrendered their crown in 2017 at Strzegom (POL) to Great Britain, the record-breaking winners of 22 team titles since the championship began in 1953.

Germany has a wealth of talent to choose from as they are allowed to enter 12 combinations. The reigning individual champions, Ingrid Klimke (GER) and her brilliant SAP Hale Bob, look to have timed their title defence to perfection with a sparkling win in the recent CCI4*-S at Aachen (GER) and it will be fascinating to see if three-time European Champion Michael Jung can win a record fourth title on new ride FischerChipmunk FST, a horse he has taken over from former team mate Julia Krajewski (GER).

Cook, who celebrates her 49th birthday on Cross Country day, will be making a remarkable ninth FEI European Championship appearance, riding Billy the Red. In addition, Britain will be calling on world number two, Oliver Townend, with his dual Kentucky CCI5*-L winner Cooley Master Class and following the withdrawal of Tom McEwen and Toledo De Kerser from the British squad, Pippa Funnell has received the call to replace Tom, riding her own and Marek Sebastak’s Majas Hope. Dual European champion, Pippa has competed in ten championship teams – winning three European medals, the first of her titles in Luhmühlen 20 years ago in 1999 – and has represented Great Britain at three Olympic Games.

Irish eventing is on the crest of a wave with world team silver last year. Can they go one better this time? No doubt statistician Sam Watson, who has had much international success this season and who rides the eye-catching dun, Tullamore Flamco, can provide the odds. In a neat twist, his father, John, was a member of the last Irish team to win the Europeans, 40 years ago at Luhmühlen in 1979.

Aside from the contest for medals, crucial Olympic qualifications are at stake for the top 2 teams that have not already qualified.

Follow all the live action on FEI TV and live results on www.luhmuehlen.de.