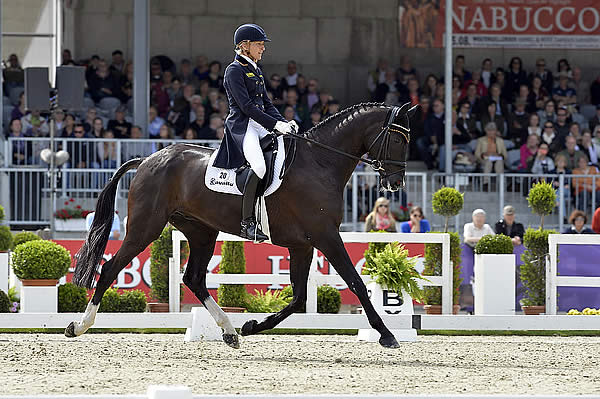 Lausanne (SUI), 14 June 2013 – Ingrid Klimke (GER) and her black gelding Tabasco TSF made a perfect picture as they took the lead after Dressage at Luhmühlen, presented by DHL Paket, the penultimate leg of the HSBC FEI Classics.

Klimke, who sets the standard for the Dressage phase in Eventing, earned a mark of 34.0. The 45-year-old, who finished fourth in the Freestyle at last week’s German National Dressage Championships, has a 2.7-point lead over another expert in the field, Lucinda Fredericks (AUS) on last year’s runner-up, Flying Finish.

“Tabasco felt super and concentrated very well,” said Klimke of the 13-year-old by Heraldik. “Chris [Bartle, the German team trainer] and Hans [Melzer, team manager] persuaded me to come here as they said they wanted to know if he is a four-star horse. “I said ‘Do you really need to know this year?’ But now I am glad that I came and we will know the answer to their question by Sunday!”

Fredericks’ result was all the more creditable as she suffered a nasty fall in March and the resulting injury to her collarbone required surgery. She had two months out of the saddle and has only ridden Flying Finish in one competition this year.

“I think the Cross Country is tougher this year, but perhaps that’s because I’m a year older!” said Fredericks. “I don’t sleep well before Cross Country anyway, but tonight I’m going to try and dream of tigers and get into an attacking frame of mind.”

Of her Dressage test, she commented: “I think it was better than last year. Flying Finish is such a genuine horse and I think will continue to improve.” Fredericks also praised the opportunity Luhmühlen offers for arena familiarisation, and for the consistency of surfaces in the warm-up areas and the competition arena.

Andrew Nicholson (NZL) looks set to increase his commanding lead in the HSBC FEI Classics, and he has three chances to do it. He is in third place on 38.0 after a polished display on the Pegasus-like grey, Mr Cruise Control, and is also in touch in 14th on Rathmoyle King and 20th on the Spanish-bred mare Qwanza.

Zara Phillips’ (GBR) visibly more established performance on her Olympic horse High Kingdom has put her in fourth place on 39.7, the gelding’s best mark at this level. The Irish-bred bay was markedly more engaged and rounded than at Badminton, where he had a run-out across country, and was “very bouncy to ride,” according to Phillips.

Luhmühlen’s defending champion, Michael Jung (GER), had to withdraw Leopin just before the competition, but his compatriots are to the fore, with Peter Thomsen (Horseware’s Cayenne), Kai Rüder (Le Prince des Bois) and Dirk Schrade (Edino) in fifth, sixth and seventh places.

The home side does not have it all their own way, however. Five nations are represented in the top 10, with Japan’s Kenki Sato, who is trained by Jung’s father Joachim, in eighth on Chippieh, just ahead of two Australians, Andrew Hoy (Rutherglen) in ninth, and Kevin McNab (Clifton Pinot), 10th.

Bettina Hoy (GER) may have caused a major form upset after finishing the Dressage phase in 50th and last place with a score of 80.8, but she deserved 10s for her stickability. Lanfranco TSF was thoroughly wound up and refused to co-operate, rearing repeatedly in the rein-back and giving Hoy a rough ride throughout.

Luhmühlen received a drenching of rain last night and the footing on the Cross Country will be all the better for it. Klimke, who has two Olympic gold medals but is yet to win a CCI4*, thinks Tabasco’s success over a variety of CIC3* courses will stand him in good stead.

“Tabasco needs a lot of support,” she said. “I have to tell him what to do and I’ll need to keep him concentrated. Anyway, we’ll know tomorrow if he’s a four-star horse!”