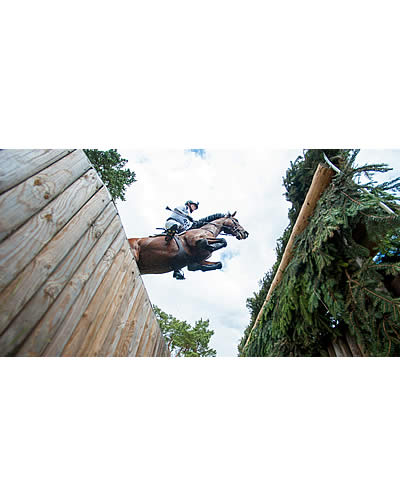 Ingrid Klimke (GER) is pictured here with Horseware Hale Bob on Cross Country at last year’s FEI Classics™ in Luhmühlen (GER). Klimke is now heading back to her home CCI4* presented by DHL this weekend (18-21 June) with “Bobby”, and with an obvious chance to extend her lead of this year’s prestigious FEI Classics™ series. (Jon Stroud/FEI)

No German has won the FEI Classics™ since its inception in 2008, but, going into the fifth leg, the supremely talented rider already has a four-point lead over three-time series winner and world number one William Fox-Pitt (GBR) who does not have a ride at Luhmühlen.

Klimke’s team mate Michael Jung is also expected to climb the leaderboard, on which he is currently lying third. The reigning Olympic and European champion has entered fisherRocana FST and La Biosthetique Sam FBW, the horses on which he finished first and third at Kentucky (USA) in April.

Established German riders Andreas Dibowski, Peter Thomsen and Dirk Schrade plus young talents Niklas Bschorer and Claas Herman Romeike all have rides and their team chef d’equipe Hans Melzer said that he wants to see as many combinations as possible qualified for next year’s Olympic Games in Rio (BRA) where Germany will be defending their title.

New Zealand holds perhaps the strongest entry of all the 13 nations represented at Luhmühlen. Last year’s winner Tim Price, a runner-up to Jung at Kentucky, rides the promising CCI4* debutant Bango, and the 2013 victor, Andrew Nicholson, has the lovely Spanish-bred mare Qwanza back in action.

Surprisingly, neither of New Zealand’s Olympic champions, Sir Mark Todd and Blyth Tait, can boast a CCI4* victory at Luhmühlen in their CVs, but both their respective mounts NZB Campino and Xanthus lll, recently first and third in the CIC3* at Tattersalls (IRL), could deliver exciting results.

Event director Julia Otto has expressed her delight at the high-class entry and Cross Country Course Designer Mark Phillips (GBR) has revealed some radical changes made to his track, which runs in a reverse direction to last year.

“It is a completely new approach,” explains Capt Phillips, adding: “The DHL Water Complex doesn’t come up so early in the course, giving horses and riders a better chance to warm up.” He has also redesigned the famous Meβmer water complex, which is lighter and more open after trees have been cut back, and has increased the use of frangible devices in consultation with Technical Delegate Martin Plewa (GER).

The experienced German official commented: “Another safety aspect that is often overlooked is the ground, but, to my mind, the conditions here in Luhmühlen are fabulous. It’s like walking a golf course.”

The action starts with the first horse into the Dressage arena at 1.30pm local time on Thursday. Follow the competition with live coverage on FEI TV (www.feitv.org) and live results on www.luhmuehlen.de.