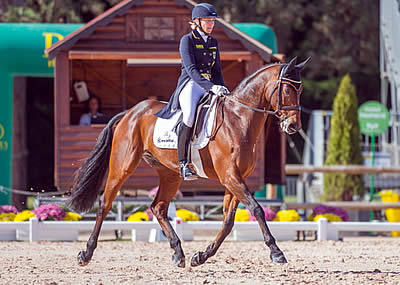 Germany’s Ingrid Klimke, riding the 10-year-old Horseware Hale Bob, and William Fox-Pitt (GBR), with the 14-year-old Parklane Hawk, were the only two riders to score below 40 penalties and they are now tying for the lead at this stage on 39.3 penalties apiece.

Klimke, who has won numerous team gold medals for Germany, has yet to win a CCI4*. It is her first visit to Pau since the FEI European Championships were held at the French venue, a racehorse-training centre, in 2001.

“My horse, ‘Bobby’, has proved he can do the CCI4* distance when he completed Luhmuhlen this year,” she said. “He is sharp and clever and I’m looking forward to riding him across country.”

Fox-Pitt, in contrast, is a regular at Pau and has won it twice, in 2011 on Oslo and last year on Seacookie, the horse on which he is currently lying in fifth place with a score of 41.8.

“I couldn’t split my two horses,” he said. “Seacookie has got good memories of Pau and when he feels confident, he can do anything. ‘Parker’ has had a few issues this year and has missed some runs, but he is on good form. The only problem is that he is a strong, fast horse and I am wondering whether I will be able to hold him on the Cross Country.”

Andreas Dibowski (GER), the 2010 Pau winner, is in close contention in third place on FRH Butts Avedon, only 1.4 penalties behind the joint leaders.

Britain’s Nicola Wilson was visibly thrilled with her CCI4* first-timer One Two Many after scoring 41.2 penalties. The 12-year-old by Chacoa won the CIC3* at Blair Castle (GBR) in August.

The young Belgian rider, Julien Despontin, 25, has made a good start to his first CCI4* and is in sixth place on 43.7 on Waldano 36, just ahead of the Kentucky (USA) runners-up and Pau first-timers Lauren Kieffer (USA) and Veronica (44.2).

Pierre Michelet’s (FRA) Cross Country, which follows a twisting route on and off the racecourse and is 30 seconds longer than in 2013, is, as ever, earning the riders’ respect. Fox-Pitt deems it even more challenging than last year.

First out on course tomorrow 14.00 CEST is Ireland’s Joseph Murphy on Sportsfield Othello.

Follow all the action live on FEI TV (www.feitv.org), with live results on www.event-pau.fr.