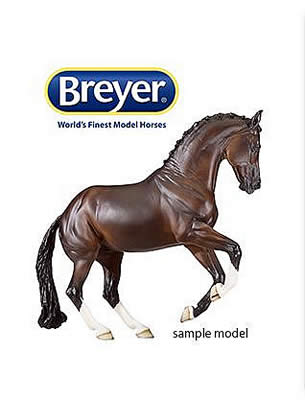 Gladstone, N.J. – June 16, 2017 – Kim Haymond of Prairie Village, Kansas has won the United States Equestrian Team (USET) Foundation’s recent PonyUp! fundraising contest in which participants created teams to help raise funds to support our U.S. equestrian teams. In addition, Breyer® also joined the contest and agreed to create a custom-painted Breyer® model on the mold of the winner’s choice. The horse selected could be the winner’s own horse or simply the horse of their dreams! Breyer® creates only one or two custom models each year and the winning prize was valued at $2,500.

Haymond is an avid Breyer® collector and is well-known throughout the model horse hobby as the creator of exquisite, realistic and scaled environments in which to display model horses. Haymond often works with her mother, Kathi, the co-owner of Tabletop Studios, on projects. Recently, the pair created a set of bases for dioramas on display in the Kentucky Horse Park Gift Shop. They are well-known teachers and often give workshops for Breyer® at BreyerFest and other events. As the winner of the USET Foundation’s PonyUp! fundraising contest, Haymond will be the recipient of a custom-designed Breyer® model of her choice as well as a framed Rio Olympic poster signed by the entire 2016 U.S. Olympic and Paralympic equestrian teams.

“I loved the idea of supporting our U.S. equestrian teams and winning such a coveted prize. Breyer® rarely makes custom models and I intend to use this opportunity to create my dream horse,” said Haymond.

Haymond was in a head-to-head race for first place with 17-year-old Carly Kudalis of Pelham, New Hampshire. The high school junior, who competes with her 6-year-old American Saddlebred gelding in saddle seat, hunt seat and dressage, engaged in a wide variety of activities to achieve her fundraising goal including creating and selling custom, hand-painted models on eBay, raffling off a pair of highly sought-after New England Patriots tickets and hosting a plant sale. The race to the finish was intense and in the end, Haymond won by less than $200.

“I decided to participate in the PonyUp! contest because I am first and foremost absolutely in love with horses,” said Kudalis. “It was an amazing experience. I love working with Breyer® and everything they do. I also 100 percent support the USET Foundation. The contest was awesome. It was an intense three weeks but it turned out pretty well. I am happy with how it went!” 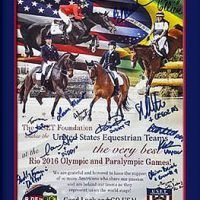 “We were so impressed by the tremendous effort that Carly made that we have decided to present her with a runner-up prize,” said Stephanie Macejko, Breyer®’s vice president of marketing. “She showed such dedication and ingenuity in her efforts to raise funds that we just had to do something special for her.”

Overall, the PonyUp! contest was a huge success and fulfilled its mission of creating awareness of the need to support the USET Foundation, which relies primarily on donations to fund our high performance horses and athletes representing Team USA at the highest levels of competition around the word. Young athletes are the future of the sport and the funds raised in the PonyUp! contest will help introduce and develop the next generation of high performance equestrian athletes.

The USET Foundation will be hosting Breyer®, the maker of the world’s finest model horses, for another exciting Pony Up! Festival at their headquarters in Gladstone, New Jersey, Saturday, June 17. This fun, hands-on and family-oriented festival will feature some of the real local horses that inspired the Breyer® models.