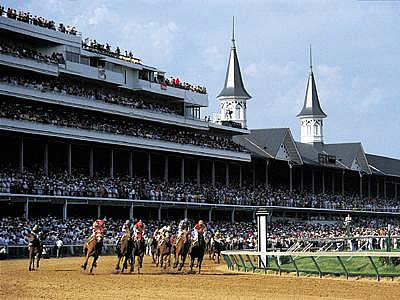 The Kentucky Derby is a horse race held annually in Louisville, Kentucky on the first Saturday in May, capping the two-week-long Kentucky Derby Festival. The race is a Grade I stakes race for three-year-old Thoroughbreds at a distance of one and a quarter miles (2 km) at Churchill Downs. Colts and geldings carry 126 pounds (57 kilograms) and fillies 121 pounds (55 kilograms).

The race is known in the United States as “The Most Exciting Two Minutes in Sports” or “The Fastest Two Minutes in Sports” for its approximate duration, and is also called “The Run for the Roses” for the blanket of roses draped over the winner. It is the first leg of the American Triple Crown and is followed by the Preakness Stakes, then the Belmont Stakes. Unlike the Preakness and Belmont Stakes, which took hiatuses in 1891-1893 and 1911-1912, respectively, the Kentucky Derby has been run every consecutive year since 1875. A horse must win all three races to win the Triple Crown. In the 2015 listing of the International Federation of Horseracing Authorities (IFHA), the Kentucky Derby tied with the Whitney Handicap as the top Grade 1 race in the United States outside of the Breeders’ Cup races.

The attendance at the Kentucky Derby ranks first in North America and usually surpasses the attendance of all other stakes races including the Preakness Stakes, Belmont Stakes, and the Breeders’ Cup.

A Visual Guide to The Kentucky Derby is an interactive infographic dealing with interesting facts and trivia on the history and pageantry of one of sport’s biggest events. From the Derby’s origins to dominating bloodlines and on to ladies fashions and mint juleps… this infographic has a little bit for every one as it unfolds the most exciting two minutes in sports!