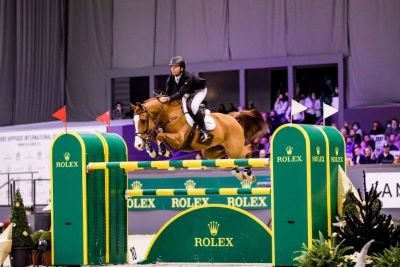 Eighth to go, 56-year-old French veteran rider, Roger-Yves Bost, demonstrated his experience, recording the class’s first clear round with his stallion, Cassius Clay VDV Z. Team gold medallist at the 2016 Rio Games, Bost was soon to be joined by compatriot Edward Levy, who went clear with his mare, Rebeca LS. At the halfway stage, the two Frenchmen were joined in an exclusive group progressing to the jump-off comprising Kent Farrington and his long-time partner, Creedance, and two future next generation riders: 22-year-old Swiss Edouard Schmitz and his 12-year-old gelding, Quno, and 24-year-old Greek, Ioli Mytilineou with her talented 10-year-old gelding, L’Artiste de Toxandra, who she refers to as her ‘big friendly giant’.

Into the jump-off and it was Farrington who proved too strong for the other 13 riders, clearly demonstrating how much he loves competing at CHI Geneva. With half of the field going double clear, Farrington and his gelding, Creedance – who possesses a superior mix of speed and accuracy – held on and had enough to beat Fredricson into second place by 0.47 seconds. Deusser slotted into third.

Thrilled with his win, Farrington commented: “It’s great to be back at CHI Geneva. It’s tough times in the world still, so I’m very happy the organisers are able to put on this great event. It feels amazing to be competing with these guys, the best riders and horses in the world. We’ll use Gazelle in the Rolex Grand Prix on Sunday. She’s feeling good, and the plan is to jump her in a small round tomorrow and then go from there.”