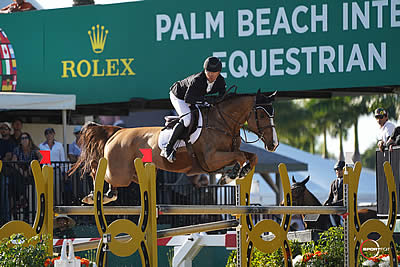 “For this level of competition I’m producing younger horses, so for me it was more about what the horse is ready to do than how fast the class is going,” said Farrington of what shaped his plan for Thursday’s jump-off. “Kaprice is naturally very quick, and she grows in her confidence off riding with a bit of speed because she is extremely careful. It’s an incredible horse and it’s all about keeping her confidence high.”

For the second week in a row, Scott Stewart and Everwonder earned the championship title for the Green Hunter 3’9” division in the E. R. Mische Grand Hunter Ring. Stewart, of Wellington, FL, rode Everwonder to three first-place ribbons, as well as two second-place finishes to secure champion in the division.

The eight-year-old gelding owned by Ella Bikoff is going into its third season with Stewart. “We bought him when he was a five-year-old stallion from Canada, where he was mostly doing dressage,” Stewart explained. In their first few outings, the pair did a few pre-green classes and had a successful season last year showing in the first year green hunters.

While Stewart will continue to show Everwonder, owner Bikoff, of Whitestone, NY, is also starting to take over the reins. “The idea is to bring him along for Ella to do in the Small Junior Hunters,” said Stewart. Once World Championship Hunter Rider (WCHR) week during week six is finished, the gelding will mainly just show with Bikoff.