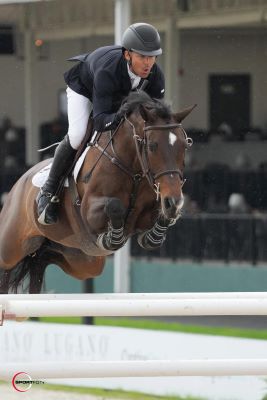 Wellington, FL – February 13, 2022 – On Sunday, February 13, the final day of the 2022 Winter Equestrian Festival’s (WEF) fifth week sponsored by Fidelity Investments®, the $75,000 CaptiveOne Advisors 1.50m Championship CSI5* was the featured event. The class saw Kent Farrington (USA) and his newest partner, Easy Girl, fly to the top of the leaderboard.

The day was met with wet conditions as the skies opened up on the final day’s exhibitors. Despite the downpour, the Palm Beach International Equestrian Center’s (PBIEC) footing remained solid and international competition continued on without issue.

Featuring 56 horse-and-rider combinations, Kelvin Bywater’s (GBR) last five-star challenge defeated 16 entries with a single rail, but allowed for 17 pairs to advance forward to the short track. Ireland, Great Britain, United States, Italy, Egypt, and Belgium were well-represented by the returning field. Of the 17 to come back, only four managed to produce double-clear efforts. It was a win for the home team as Farrington did what he does best and sped to the top with Kent Farrington LLC’s 11-year-old Oldenburg mare Easy Girl (Conthargos x Nintender) with the unbeatable time of 37.27 seconds.

Margie Engle (USA) and Storm Ridge Show Horses, Garber, and Gladewind’s entry Dicas raced into the runner-up position. She and the 13-year-old Rheinlander gelding (Diarado x Cassini I) closed in on the leading pair but finished roughly a second behind with a clear time of 38.24 seconds. Great Britain got the remaining podium position as Matthew Sampson and his gelding Geneve R clocked in another clear effort with a finish on 38.24 seconds.

The weekend concluded with the $50,000 Griffis Residential Grand Prix CSI2* wrapping up competition in the International Arena. The course proved too challenging for almost all of the 43 entries as only Chloe Reid (USA) and Team Reid LLC’s Crossover 4 found the path to a clear first round.

The final jump on course was the downfall for a large group of the contenders and groans could be heard in the crowd each time it fell and dashed the hopes of a jump-off. Sophie Maher (USA) and Quentin Judge (USA) came the closest to producing a jump-off but suffered at the hands of a single time fault added to their score. As the last combination took down a rail, it was evident Reid’s single faultless round in 64.54 seconds would be the winner.