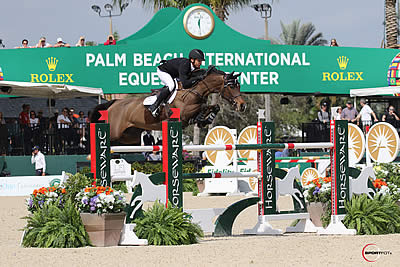 Wellington, FL – February 6, 2020 – Riding out of the 12th spot in a jump-off field of 19, Kent Farrington (USA) sped through the timers to win the $137,000 Equinimity WEF Challenge Cup Round 5 CSI5* riding Austria 2, owned by Take the High Road LLC, on Thursday, February 6, at the Winter Equestrian Festival in Wellington, FL.

The first round of the WEF Challenge Cup had 52 entries, and with 19 clear over the course designed by Anthony D’Ambrosio and Andy Christiansen Jr., speed was all-important. The early lead was set by Capt. Brian Cournane (IRL) and Penelope Cruz, owned by Cournane and Mr. and Mrs. Robert Stiller, at 43.15 seconds, which would hold up for fifth place. The leading time dropped down to 41.56 seconds when Olympic individual gold medalist Eric Lamaze (CAN) piloted The Chacco Kid Group’s Chacco Kid around the short course. They would end on a podium finish in third place.

But it was Farrington and Austria 2 as the next pair into the ring that would set a blazing time of 40.68 seconds that would remain untouched for the remaining seven trips.

“I don’t really feel a limit on her; she’s got an unbelievable mentality,” said Farrington of the 12-year-old Holsteiner mare (Casall x Corrado I). “That goes a long way, and a horse that really wants to fight for you is a huge part of the battle of doing high level sport.”

Hunter competition during Week 5 of WEF continued on Thursday with Jennifer Bauersachs and Another Love claiming champion in the High Performance Conformation Hunter division. The duo won the model and the under saddle, and also received two firsts, a second, and a fourth in the E. R. Mische Grand Hunter Ring.

Bauersachs has been partnered with Another Love, who is owned by Meritage Stables LLC, for two years. Last year, Bauersachs, of Frenchtown, NJ, competed the mare successfully in the second year green hunter division. “She’s really brave and reliable,” Bauersachs described of Another Love. “It’s fun because I can count on her and now I feel like I have a real partnership with her.”

Aside from winning both the model and under saddle, Bauersachs and Another Love also scored a pair of 88s to win both over fences classes on the second day of the division. “I ended up in a rubber snaffle with her and she loved it. I think the softness of being able to ride her in that bit definitely stood out,” Bauersachs commented. “I love that she’s a mare! I get along with them well and when they partner with you, they really partner with you.”