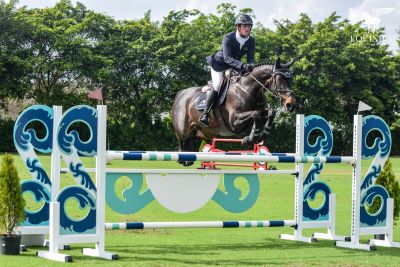 Wellington, FL (February 18, 2021) – With Black Watch Farm’s brilliant bougainvilleas in full bloom, Ireland’s Darragh Kenny once again proved himself a master in the $5,000 1.30m Rising Star Classic. Over a course designed by FEI and Olympic designer Leopoldo Palacios, Kenny’s effortless riding ascended him to the top of the class, beating out 67 horse and rider combinations. Usually scheduled for Wednesdays during Wellington’s winter equestrian season, February 17’s Rising Star was pushed to Thursday due to inclement weather, and the final day of Turf Tour 7 at Black Watch Farm will commence at 8am on Friday with classes from the .80-meters to a $3,000 1.30m Speed Stake to the highlight $15,000 1.40m Turf Tour Grand Prix.

An early and fast double clear set by Lucy Matz and Bailey would lead the class most of the day, as the nearly 70 challengers raced through a number of tight rollbacks in the jump off in an attempt to beat their time of 38.468 seconds. The only rider to best them was Darragh Kenny aboard Cicomein VDL, gliding around both the first and second rounds to finish on 37.351 seconds in the jump-off. Olympian Peter Wylde and Royal Flush rounded out the top 3, jumping off in 38.352 seconds. Darragh remains poised to continue his domination of the Turf Tour 2021 circuit, having now put in back-to-back wins in the Rising Star Classic and with three consecutive wins in the Turf Tour Grand Prix going into Friday.

“The Turf Tour is a great place to bring the horses,” said Kenny. “Whether the horses are up and coming or one of my experienced older horses, it’s great for them to get out and see different rings. I think it’s a tremendous asset to have shows on the grass as the horses really like it and it freshens them up a bit seeing a different ring and the different weekly venues.”