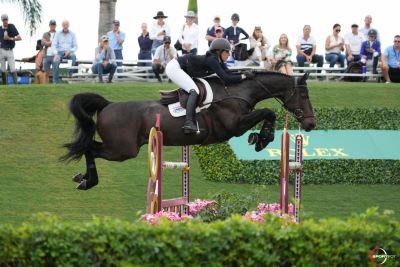 Wellington, FL – April 3, 2022 – The final day of the 2022 Winter Equestrian Festival (WEF) concluded 13 weeks of competition on Sunday, April 3, with the last international jumper class of the circuit on the Derby Field at Equestrian Village as well as the closing classes across all divisions at Wellington International. Kelli Cruciotti Vanderveen (USA) emerged as the last international victor as she and Forever SFN won the $50,000 CabanaCoast Grand Prix CSI2*.

Guilherme Jorge (BRA) built one final challenging effort for the 45 two-star competitors in the class. He tested the entries with an early triple combination, but the efficient time allowed of 74 seconds was only the deciding factor for two duos. Thirteen more had their hopes dashed with the fault of a single downed obstacle. As the first round concluded, the returning line-up consisted of 11 representatives from four different nations prepared to battle it out over the jump-off track.

Cruciotti Vanderveen was the second to return for the short course and established the first clear round over the track with Springpaarden Fonds Nederland’s 12-year-old KWPN gelding Forever SFN (Azteca VDL x Non Stop) in a time of 38.18 seconds. Five other horses would go clear over the track, but none would come close to the leader’s blazing time.

The final class in the International Arena was the $50,000 CaptiveOne Advisors 1.50m National Grand Prix. With 51 entries in a starting order stacked with six Olympians and riders from 13 countries, course designer Ken Krome (USA) had his work cut out for him. He set a formidable test that only brought back six for the jump-off. Rising to the top of the class was Belgian Olympian Nicola Philippaerts riding his own Gijs.

Philippaerts came back third in the jump-off, chasing a time of 44.446 seconds set by Darragh Kerins (IRL) and Intuitive, owned by Eve Jobs, which would hold up for third place. Philippaerts and Gijs brought the winning time down to 41.421 seconds. Second place went to 2020 Tokyo Olympic Games individual gold medalist Ben Maher, who rode Point Break, owned by Maher, Pamela Wright, and Charlotte Rossetter, to a clear round in 43.344 seconds.