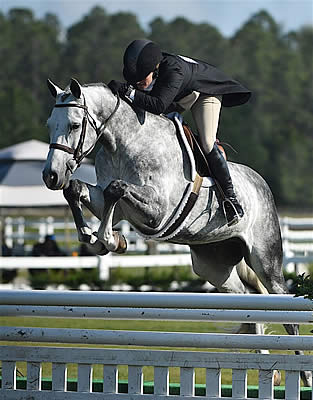 Well-known professional rider, Kelley Farmer of Wellington, Florida, had four mounts in the International Hunter Derby and rode away with the win in the irons of David Glefke & Oakmont Stables, LLC’s Namely. The pair earned an overall score of 370, just beating out second place finisher, The Full Monty, owned by Woodrun and ridden by David Jennings of Franklin, Tennessee, who scored an overall 369.50.

“I knew David [Jennings] had won this class before and he rides beautifully. His horse is really seasoned and I knew he was going to try to be handy and go nicely. So on Namely I knew I had to be quite handy. Namely is really rideable and I was able to be nice and tidy and jump the high options and fortunately he went nicely and got great scores. I made a mistake in the handy round on my other horse Consent who was on top after the Classic round, so it was nice to be able to come back with Namely,” she said.

“We own Namely with Darrah Kenney and his first horse show in the States was Week XII at WEF. He was champion in the High Performance competition and I rode him in the $15,000 Derby on the field there last Friday and he was great. It did him good to have a week to get more acclimated here. Namely tries very hard and he’ll do whatever you want,” said Farmer.

“Paul [Jewell] did a great job designing the course. The course was inviting and not overwhelming for a young horse. While we’re big fans of grass fields, it can be spooky for a young horse. While the course was tough enough, it wasn’t overwhelming and rode nice and smooth – it was very inviting. He didn’t build anything that was too much for them,” Farmer commented. “There aren’t too many classes on grass fields anymore and the horses aren’t acclimated to it. We personally jump on them all the time at home and in Kentucky and our horses are pretty comfortable in that situation. But so many other shows just keep using rings and so a lot of horses aren’t used to it,” she added.

Farmer commented, “The course was nice. That field is really nice and Bob puts on a great show here every year. It’s always lovely and it’s nice that he keeps having this class. We really appreciate people like him who do this for the hunters,” she said.