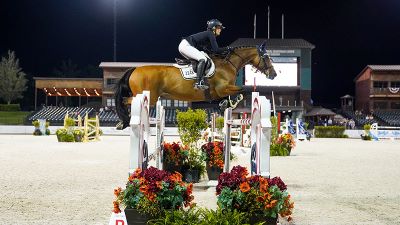 Forty-one horse and rider combinations challenged the course designed by Andy Christiansen (ECU), with 13 pairs returning for the second round jump-off. Savard and her 2011 Selle Francais mare (Dollar Dela Pierre x Carnute) conquered the shortened course, going in with a third place standing and jumping to a first place win.

Savard praised her rookie mare for her efforts during the evening, sharing, “This is her first FEI class, and both of our first class under the lights! She’s awesome. She’s naturally so fast, so that’s how I was able to be so much faster. She just lands and goes!”

Despite being new to competing under the lights, the pair managed to pull out a win in the jump-off, finishing far ahead of the second place winners. The pair sped around the jumps starting from the second they walked into the ring. “My coach, Alberto Michan, gave me instructions to go from [jump] one to two as quickly as I could, so I did that, then the rest I just went tidy,” Savard shared. “I think jump one to two was the spot to win that people were missing.”