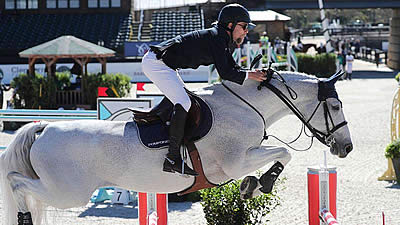 Mill Spring, NC – October 17, 2020 – In a star-studded class of international athletes from eight countries, Karl Cook (USA) and Caillou 24 mastered the $137,000 MD Barnmaster Grand Prix CSI 3* with a lightning fast jump-off time of 36.75 seconds. Landing in second place nearly a second later was Kent Farrington (USA) and Kaprice, whom Farrington owns with Haity McNerney, with a time of 37.52 seconds. Darragh Kenny (IRL) and Carthano, owned by Darragh Kenny with Whiterock Farm, Ltd., followed in third with a final score of 38.87.

The Ghuiherme Jorge (BRA)-designed course challenged 50 pairs, with only nine advancing to the jump-off round. Cook and Caillou 24, owned by Signe Ostby, pressed hard to claim the win thanks to Cook’s instinctual move to leave out a stride on the final gallop.

“It was just land and go. I saw it and realized if I wanted to win, I had to try it. Until he [Caillou 24] took off I didn’t think we were going to make it!” shared Cook.