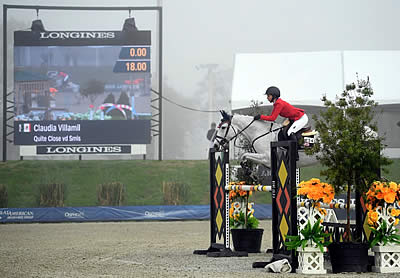 For the first time, HITS Post Time Farm hosted a Nations Cup style event for both Junior and Children’s riders.  Mexico, Ireland, Puerto Rico, and the USA were represented and classes for each were held throughout the week with the Nations Cup style event on Saturday. These talented young riders made the competition exciting to watch for both their fellow competitors and spectators.

Thursday marked the start of the Junior and Children’s Classes. In the $1,000 Welcome Classic-Junior, Claudia Villamil, riding for Puerto Rico, took home the first place award aboard QUITE CLOSE VD SMIS with a jump-off time of 30.90. In second place, Faith Davis (USA) followed with DA VINCI and a jump-off time of 38.09.  Third place went to Nicole Meyer Robredo (Mexico) aboard CHANEL with a four-fault first-round time of 64.16.

The Welcome Classic – Children’s also took place on Thursday.  Daniel Kerins, representing Ireland, came in first aboard ELWOOD with a jump-off time of 30.80. Less than one half of a second behind him was Natalie Pedley (Puerto Rico) and TRUE BLUE MATE, taking home the second place award. In third place was Francis Derwin (Ireland) and STAND BY ME with a jump-off time of 31.81, just one second behind Pedley.

On Friday, the day began in Ocala Horse Properties Stadium with the $5,000 City of Ocala Grand Prix – Junior. Carolina Villanueva Suarez (Mexico) rode to the first place finish aboard ZABEL D with no jumping faults and just two time faults in 90.60. Second place was awarded to Villamil and QUITE CLOSE VD SMIS with a four-fault score in a time of 77.04. Davis and DA VINCI came in third place with a four-fault round-one time of 81.63.

Excitement was at an all time high on Saturday morning, as riders prepared for the Nations Cup style class, which would consist of two rounds and a possible jump-off.

The $5,000 FEI International Invitational Team Competition – Junior had two teams: the Aztecs, consisting of four riders representing Mexico and Chef D’Equipe Stanny van Paesschen, and the Stars and Stripes, which consisted of three riders, two American, and one Puerto Rican, and Chef D’Equipe Diann Langer. In round one, two riders from each team went clear, leaving the Aztecs with four faults and the Stars and Stripes with twelve faults. In round two, both Luciana Gonzalez Guerra aboard CHARLOTTA and Carlos Rodolfo Molina Gordilla aboard TREBON DE LA NUTRIA went clear for the Aztecs, which led them to a Gold Medal finish with a two-round total of eight faults. The Stars and Stripes were awarded the Silver Medal with a two-round score of twenty-eight faults.

In round two, all but three riders went clear, creating a three-way tie and jump-off. Natalie Pedley and TRUE BLUE MATE had an incredible jump-off time of 37.88, which gave Americas the Gold Medal. Eire was awarded the Silver Medal with Francis Derwin’s jump-off time of 39.14. Ansgar Holtgers Jr. earned an eight-fault jump-off time of 51.68, earning Team Stars and Stripes Children’s the Bronze Medal.