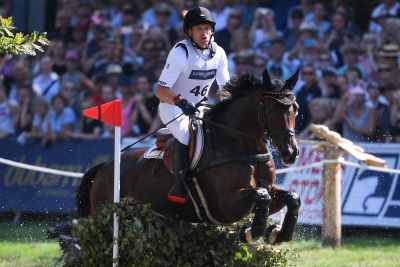 After Germany’s Michael Jung won the second of his two consecutive Individual Olympic Equestrian Eventing titles at the Rio 2016 Olympic Games, he was asked what he had next in his sights. “Tokyo 2020 of course, and the Europeans and maybe the world title along the way!” he replied.

He wasn’t joking of course, because the 38-year-old who made Eventing history by becoming the first to hold the European, Olympic, and World Championship titles at the same time is one of the most formidable athletes in all of equestrian sport.

He didn’t make it to the FEI World Equestrian Games™ in 2018 when his horse had an injury, but at the FEI European Championships the following year, he took team gold and was just pipped at the post for the individual title by team-mate Ingrid Klimke.

This is a man who sets the bar really high for everyone else, and if he can do the individual hat-trick in Tokyo, then he will set a new Olympic record. Charles Pahud de Mortanges from The Netherlands came out on top in Amsterdam in 1928 and again at the following Olympics in Los Angeles in 1932, and New Zealand’s Mark Todd won in Los Angeles in 1984 and again in Seoul in 1988. Both riders partnered the same horse on each occasion, the Dutchman riding Marcroix and the Kiwi riding the legendary Charisma.

Jung was also riding the same horse, the mighty Sam, when coming out on top at London 2012 and the Rio 2016 Olympic Games. This time around he will partner his 2019 European Championship horse Chipmunk, and the world waits to see what more magic he can bring.

He’ll be joined on the German team by two of the three athletes who helped clinch team silver in Rio, Sandra Auffarth (Viamant du Matz) and Julia Krajewski (Armande de B’Neville). However, it is the French who line out as defending team champions, with Thomas Carlile (Birmane), Nicolas Touzaint (Absolut Gold HDC), and Christopher Six (Totem de Brecey) flying the flag for Les Bleus.

The British arrive as reigning world champions with the world number one, Oliver Townend (Ballaghmore Class), number five Tom McEwen (Toledo de Kerser), and number 22 Laura Collet (London 52) in their side, backed up last-minute replacement reserve Ros Canter with Allstar B, the horse she rode to individual gold at the FEI World Equestrian Games™ 2018. There’s great strength in depth in this selection, while the Irish world silver medallists, and the Kiwi side that includes husband-and-wife Tim and Jonelle Price, also look highly competitive.

But there are further Olympic records hanging in the balance. Australia’s Andrew Hoy, Shane Rose, and Stuart Tinney have 166 years of life experience and eight Olympic medals between them. And 62-year-old Hoy could make Olympic history by becoming the first athlete to win gold medals an incredible 29 years apart. He won his first team gold in Barcelona in 1992 and if he could do it again, he’d break the all-time record set by Hungarian fencer Aladár Gerevich, who triumphed in 1932 and 1960.

Hoy went on to win two more team golds, at Atlanta in 1996 and Sydney in 2000, and just by turning up in Tokyo he will set an Australian record with his eighth Olympic appearance since his debut in Los Angeles in 1984 at the age of 25.

The sport of Eventing has been subject to many changes down the years, and at the Tokyo 2020 Games there will be a new and shorter Dressage test, which will take just under four minutes to complete. The Dressage and Jumping phases will be staged at Baji Koen Equestrian Centre in the city, while the Cross Country action will be held at Sea Forest Park in Tokyo Bay.

It’s all a long way from the first time Eventing was included in the Olympic programme back in 1912 in Stockholm when the competition began with Phase A, “an Endurance ride over 55km in four hours,” and Phase B, “Cross-country over 5km in 15 minutes with 12 obstacles.”

After a rest day, the all-military competitors then set out to tackle “Steeplechase over 3,500m in 5 minutes and 50 seconds with 10 obstacles,” while on day four there was “Jumping over 15 obstacles up to 1.30m high and 3.00m wide,” before finally finishing up on day five with “Dressage.” From seven starting teams, four completed and Sweden took both Team and Individual gold.

Times have indeed moved on, but the partnership between horse and athlete remains at the heart of equestrian sport, and in Olympic Eventing that partnership is at its zenith.

How it will play out….

The Individual Final Jumping test will take place after the Team Jumping Final on the same day (2 August), with the top 25 battling it out for the medals.

Eventing Dressage and Jumping will both be staged at Baji Koen Equestrian Centre, with horses travelling to Sea Forest Park for Cross Country day.

The top 25 horse/athlete combinations go through to the Individual Final.

The athlete rides the same horse throughout for the Individual classification.

There will be two horse inspections – on 29 July, the day before the Dressage phase begins, and on 2 August before the final Jumping phase takes place.

A drawn starting order will be used for the Dressage and Cross-Country tests but in the final Jumping test horse/athlete combinations will go in reverse order of merit.