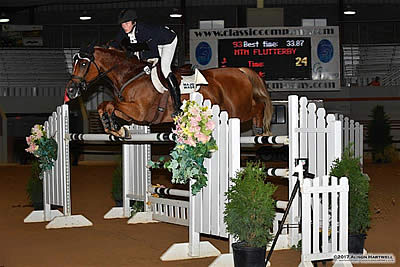 Week III of the Jacksonville Spring Classics was one for the books when fifteen year old Brian Moggre of Flower Mound, Texas and Major Wager, LLC’s MTM Flutterby won the $35,000 Sidelines Grand Prix against a field of twenty-three seasoned, professional riders.

“I’ve won a couple of grand prix before this but I would say it was a pretty tough crowd to compete against,” commented Moggre. MTM Flutterby is only 15.3 hands and Moggre has been riding her for about two years. “I went in and wanted to do my best and it feels pretty good to come out beating your trainers,” he laughed.

“When we [Moggre, McCormick and Fenney] walked the course, we knew in the first round you could do a bending 6 or 5 or direct 4. We talked about what would be best and decided that smooth and fast, executing the smoothest route with the least amount of strides was the plan,” he said.

Eleven advanced to the jump off round over a course designed by Allen Rheinheimer of Zionsville, Indiana and Moggre had two in the jump off, MTM Flutterby and DDM Equestrian LLC’s Condero 3.

First to go was David Jennings of Franklin, Tennessee and KM Farms’ KM Corfina. While their time of 35.421 seconds beat the time allowed of 43 seconds, eight jump faults would see them finish in tenth place overall. Tracy Fenney of Flower Mound, Texas and MTM Farm’s Igor Van De Heibos followed Jennings and KM Corfina with four jump faults in a time of 34.979 seconds which would see them finish in fifth place overall.

Moggre, in the irons Condero 3, followed Fenney in the order and earned eight jump faults in a time of 32.694 seconds which would find them placing eighth overall.

Diamant’s Legacy, owned and ridden by Derek Petersen of Williston, Florida, followed and the pair turned in the first double clear jump off round in a time of 33.873 seconds and set the new time to beat.

Moggre followed Petersen, this time in the irons of Major Wager, LLC’s MTM Flutterby with their own clear round in a time of 30.638 seconds and took the lead, setting the new time to beat.

“MTM Farm had a lot in the jump off and we were all going after each other and it was really fun,” he said. “My win made everyone on the MTM team really happy,” he added.

MTM Farm’s Mike McCormick commented, “We think Brian is going to be really famous. I try to not treat him like a ‘prima donna’ here. I make him tack all of his horses and help with lunging and school them,” he said. “The home team and on the road team is doing great. We must have 30 at home and 30 on the road and everyone has really been team players to get us where we are. Everyone has to work hard, because if you don’t, you’re going to have problems,” he said. “Heck, even Tracy helps!” he laughed.

“We’ve been doing great and we’re winning in the hunters and the jumpers. We’re qualified for Devon and things look great for MTM,” McCormick added.

Moggre has been buying horses from MTM Farm since 2012 and toward the end of 2015 started training with Mike McCormick and Tracy Fenney, moving his three horses to MTM Farm. “For the most part, I live on the road with them. I do online school and am a sophomore. My family has an RV and either my Mom or Dad will be at the shows with me,” commented Moggre. “I have a brother and a sister and it gets pretty hectic at times, but it’s easy to stay at the horse shows and not have to travel to and from home,” he added. “I have a very supportive family and I’m thankful for that,” Moggre said.

“I definitely want to make a career out of this like Mike. And of course, my dream since I was a kid was to be on the Olympic team. I love the sport and just want to be successful,” he added.

“This year I want to test the waters with the bigger jumps and the Nations Cup team is something I have my eye on this year,” he shared. “My next big show is Devon and that’s one I’m looking forward to,” Moggre said.

The $5,000 Horseflight Open Welcome kicked off the jumper action at the Jacksonville Equestrian Center and MTM Farm’s Tracy Fenney took the win in the irons of MTM Farm’s Reve Du Paris with their double clear rounds of 83.239 seconds and 29.310 seconds, well within the 43 seconds time allowed. No one would beat that fast second round and leave the rails up. Brian Moggre and MTM Farm’s Condero 3 came close with their clear second round in a time of 30.013 seconds, but they would settle into a second place overall finish.