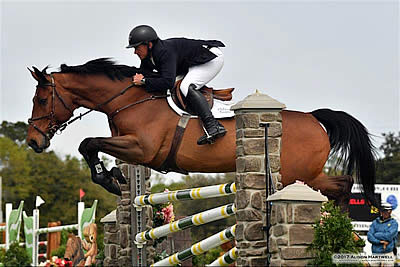 Paul Jewell of Lambertville, New Jersey designed a tough course on Sunday for the $40,777 Beau Rivage 777 Grand Prix with a first round time allowed of 87 seconds. Only five would go clear and advance to the jump off phase.

First to go in the jump off order was Alexis Brown of Dallas, Texas and Alexandra Comly’s A & A Balthazar. The pair went clear in a time of 45.135, well within the 47 seconds time allowed and set the new time to beat.

Crowd favorite Matt Cyphert of Northlake, Texas and his own Lochinvar followed in the jump off order with their clear jump off round in a time of 40.850 seconds and snagged the lead from Brown. Frank Owens of Windcrest, Texas and DS Holdings, LLC’s Capricello 2 bested Cyphert’s time by fractions of a second with their own 40.496 seconds and took the lead.

Michael Tokaruk of Germantown, Tennessee and Richie Maloney’s Lord Hugo Warande Z tried to beat Owens’ round, but their clear jump off round in a time of 44.479 seconds wouldn’t oust Owens from his leading position.

Last to go Shannon Hicks of Lake St. Louis, Missouri and Helen Gilbert’s Emir D had eight jump faults and then retired from the round, leaving Owens and Capricello 2 as victors.

Final placings had Cyphert winning second place with Lochnivar and earning a tenth place with Hannah Donald’s Hector. Tokaruk and Lord Hugo Warande Z placed third and Bowen and Mullentine Imperial finished in fourth. Hicks placed fifth and eleventh with Emir D and Al Pachini, respectively, and Penny Brennan of Aiken, South Carolina finished sixth and ninth with Cerulean Farm’s HHS Louis and her own Sun Tzu, respectively. Owens returned for an eighth place ribbon in the irons of DS Holdings, LLC’s MTM Twenties Girl and Alexis Brown of Dallas. Texas wrapped up the class with a twelfth place riding Alexandra Comley’s A & A Balthazar.

The jumper action kicked off Week V with the $10,000 Horseflight Open Welcome on the beautiful grass grand prix field.  Eight horse and rider teams turned in clear first round efforts out of a field of 18 and advanced to the second round.

Shannon Hicks and Helen Gilbert’s Emir D were the first to go clear in a first round time of 78.371. Their second round time in 38.774, within the time allowed of 45 seconds, had four faults and would see them finish in seventh place overall.

Holly Shepherd and Dejan Krunic’s Belle Clara DKS followed with a clear first round in a time of 77.662. Their second round had four faults at the first fence and their time of 38.079 had them finish in fifth place overall.

Matt Cyphert and DGS Farms, LLC’s Better Judgement were next up and turned in a clear first round in a time of 78.884 seconds. Their second round was the first to go clear in a time of 40.960 seconds and took the lead.

The lead was short lived when next to go Michael Tokaruk of Germantown, Tennessee and Richie Maloney’s Lord Hugo Warande Z followed with double clear rounds in times of 77.952 and 38.551 seconds, setting the new time to beat.

Shepherd returned to the grand prix field, this time in the irons of Loretta Patterson’s Sky High, posting double clear rounds in times of 82.754 and 39.274 seconds, which would find them with an overall fourth place finish.

Alexis Bowen of Dallas, Texas and Alexandra Comly’s A & A Balthazar followed Shepherd and Sky High. They turned in fast, double clear rounds in times of 83.420 and 39.274 seconds and temporarily took the lead.

Sitting in the enviable last to go position was Shannon Hicks of Lake St. Louis, Missouri and Helen Gilbert’s Al Pachini. Their fault free rounds in times of 79.335 and 36.720 seconds, respectively, bested Bowen’s time and had them ride away with the win.

Final placings had Bowen and A & A Balthazar in second place and Tokaruk in third with Lord Hugo Warande Z. Shepherd rode away with fourth and sixth places aboard Sky High and Belle Clara DKS, respectively, and fifth was awarded to Matt Cyphert and Better Judgement. Hicks picked up seventh and ninth placings with Emir D and C’Havinia and Damico earned eighth with Canoso. Sara Dees and her own Clearwater 5 placed tenth, Frank Owens and DS Holdings, LLC’s Capricello 2 earned eleventh, and Penny Brennan and Cerulean Stables’ HHS Louis earned twelfth place.

Nineteen horse and rider teams competed in the $3,000 Arenus Jr/Amateur Owner Jumper 1.20 m Classic Week V and it was Gulfport’s own Abigail Bergin and her own Cumlaude who galloped away with the win in their double clear rounds of 66.085 and 45.777 seconds. Of the eleven who advanced to a second round opportunity, they were one of five horse and rider teams to successfully navigate over the second round with the fastest time.

Half Time, owned and ridden by Grayson Bell of Franklinton, Louisiana, placed third with their clear second round in a time of 48.952 seconds. Christina Fisher of Alpharetta, Georgia and her own Zanzibar finished fourth and Heather Zuber of Zionsville, Indiana earned a fifth place finish with her own Firebird. Sixth went to Maria Roberts of Collierville, Tennessee and her own Qasqai while seventh was awarded to Apex Equestrian Center’s Ashville Rock, ridden by Foster.  Catherine Zaunbrecher of Lafayette, Louisiana and her own Leonardo wrapped up the class with an eighth place finish.

The Jumper Groom’s Class sponsored by Oakwell Farms and Whitney and Frank Owens took place Sunday before the $40,777 Beau Rivage Grand Prix and awarded Dominique Damico’s groom, Ivan Montes, the big money. The Groom’s Award is an annual event at the Gulf Coast Winter Classic and recognizes the show’s unsung heroes, the grooms. “We are proud to recognize the hard workers behind the scene who are often charged with the responsibility of the care of our horses,” said Bob Bell, Gulf Coast Classic Company President.