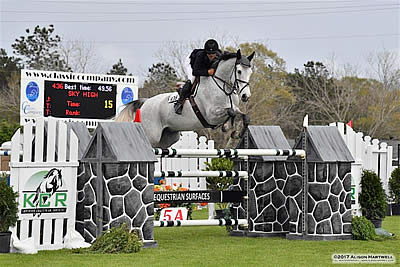 Holly Shepherd of Grand Bay, Alabama and Loretta Patterson’s Sky High galloped away with their first Grand Prix win in the $40,777 Kruse Cushion Ride Grand Prix, presented by the City of Gulfport, on a course designed by former Assistant Olympic Course Designer for the 1996, 2000, 2004, 2008 and 2016 Games, Manuel Esparza of Mexico City, Mexico.

Esparza set the first round time allowed at 83 seconds. “The course was well designed and had a nice flow to it. Early on the course looked pretty good, and there weren’t any big tricks, but it rode a little backwards,” commented Shepherd. “You’d jump in fast but then have to slow it down, hurry up, slow down,” she said. “The jumps were big and the time allowed was really tight,” she added.

Carson Grisham of Southlake, Texas and her own Crack De Muze, winners of the $10,000 Horseflight Open Welcome two days earlier, were the first horse and rider team to turn in a clear first round in a time of 49.566 seconds.

Four rides later, Shepherd and Sky High insured there would be a jump off with their clear first round in a time of 82.345 seconds.

Shannon Hicks of Lake St. Louis, Missouri and Helen Gilbert’s C’Havinia followed Shepherd with the next clear first round in a time of 82.706 seconds and would round out the jump off roster.

Grisham and Crack De Muze were the first to go in the jump off and turned in a fault free round, beating the time allowed of 59 seconds with their own 49.566 seconds. Shepherd and Sky High were next to go.

“My jump off plan was to leave the strides out, rather than slow it down,” she said when asked about her strategy. “He loves the field, and he’s a great galloper,” Shepherd said. “He’s a little slow in the air, but he has such a big stride it’s really beneficial,” she added.

“I’ve had him for about nine months. He’s got a great personality, loves to be scratched all over and is a really great horse. We’ve been doing the Grand Prix and he’s ribboned quite a bit, but this is our first win. We did a bit change a couple of weeks ago in order to maintain his step and shape, and I think we maybe found the magic. I feel like we’re on the right path and we’ll be showing here the next two weeks,” said Shepherd.

Matt Cyphert of Northlake, Texas picked up fourth and fifth place ribbons in the irons of Hannah Donald’s Hector for their one time fault first round in 83.209 seconds and his own Lochnivar who earned three time faults in their first round in a time of 85.314 seconds.

Hicks and Helen Gilbert’s C’Havinia placed eighth with their four fault first round in a time of 80.742 seconds and Dominique Damico of Berwyn, Pennsylvania and her own Canoso placed ninth. Tenth was awarded to Jorge Ludwig of Newbury Park, California and his own Lamarique, Colleen Acosta of Roanoke, Texas and Evalyn Grace LLC’s Himini earned eleventh, and Laura Connaway of Little Rock, Arkansas and her own Ceralena wrapped up the class with a twelfth place finish.

Frank Owens and DS Holdings, LLC’s MTM Twenties Girl followed Hicks with double clear rounds. Their clear second round in a time of 43.967 moved Hicks and Emir D into second position and they took the lead.

The lead was short lived when Jorge Ludwig and his own Lamarique followed suit, turning in double clear round and a second round in a time of 43.365 seconds and set the new time to beat.

Laura Connaway of and her own Ceralena followed Ludwig with a clear first round and advanced to the second round. Four faults in a time of 48.168 would see the pair finish in eighth place overall.

Cerulean Stables, LLC’s HHS Louis, ridden by Penny Brennan, were the next horse and rider team to turn in a clear first round. Their fault free second round in a time of 43.721 seconds would see the pair finish in third place overall.

Holly Shepherd and Loretta Patterson’s Sky High followed with the next clear first round effort. Their second round resulted in four jump faults in a time of 44.630 seconds which would find them with a seventh place finish.

Carson Grisham and her own Crack De Muze followed Shepherd and Sky High with double clear rounds and a second round time of 42.222 which took the lead.

Matt Cyphert and Hannah Donald’s Hector, winner of last week’s $25,000 CWD Grand Prix, followed Grisham, but their second round saw four jump faults in a time of 43.126 seconds which would find them finishing in sixth place overall.

Final results had Grisham and Crack De Muze with the win and Ludwig and Lamarique in second. Brennan and HHS Louis picked up third and Owens and MTM Twenties Girl placed fourth. Hicks and Emir D finished in fifth and Cyphert and Hector picked up sixth place.