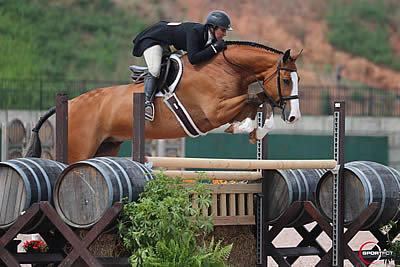 Mill Spring, NC – July 5, 2019 – Julie Curtin (USA) and Cassico repeated their 2018 victory in Friday’s $25,000 USHJA International Hunter Derby, earning a first-round score of 182 and receiving a handy score of 212 for a grand total of 394 to top the field. Harold Chopping (CAN) and Barbara Scott’s Catchphrase, a 2010 Zangersheide gelding (Marome NW x Prelude), collected scores of 160 and 193 to land in second place on a total of 353, while Kelley Farmer (USA) and As Quoted, the 2013 Dutch Warmblood gelding (Zambesi TN x Bybalia SMH) owned by David Glefke, produced rounds garnering scores of 178 and 172.5 to claim third with a total of 350.5.

Curtin and the 2011 Holsteiner gelding (Carrico x Trevigiana) owned by Rebekah Warren were able to earn a repeat victory from last year’s USHJA International Hunter Derby during Tryon Summer 4, besting a competitive field of 21 entries over the Dean Rheinheimer (USA) course design. “The course rode really nicely,” Curtin reported. “There were a lot of long lines out there, which is nice, but it’s sometimes kind of easy to get lost. This is the first time I’ve ridden in this arena – Cassico actually won this same Derby last year here on the grass! It was nice – the footing is great, and the course rode really great.

“We were eight points behind [going into the handy], so I had to just go for it all,” Curtin explained of her winning strategy. “We took every tight turn, high option, and just tried to lay it down, because I knew I had some ground to catch up. We’re getting ready for Derby Finals, so I knew I had to practice. I knew it would either work or it would not, and today it worked! He’s such a scopey horse. The jumps were big, and it was hard, but he was good.”

They made up the difference – and earned their 41-point lead – in two areas, Curtin believes: in their first jump, choosing the high option, and in overall handiness. “Jump one was hard – that was a blind turn for a high option, but he handled it so well. But otherwise, I just tried to keep it tidy everywhere. And he’s so scopey that on all the tight turns it just kept coming up nicely. The two-stride came out a little long, but he just got right up there and handled everything beautifully.”

While Derby Finals is the next goal in focus, Cassico will be Curtin’s ride in National and International Derbies for a long time to come, she hopes. “He’s still young and has a big future, so we’re really excited. Hopefully, Derby Finals will go well, but then his mother is going to start showing him; I will just do Derbies with him and let him be an amateur horse. Right now, I’m doing Derbies and High Performance with him, but we’ll back down a little bit and let her ride him in the Amateurs. Hopefully, I’ll have him for the next eight years to do Derbies on!”

Curtin, who also earned second in Friday morning’s $5,000 USHJA National Hunter Derby, concluded, “It was a very good day! Tough competition – it’s always a tough competition when Kelly [Farmer] and Evan [Coluccio] have as many horses as they had each! I’m very happy about the win.”