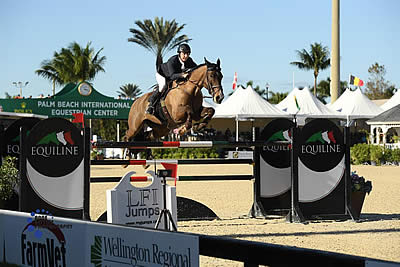 Wellington, FL – January 6, 2020 – The 2019 ESP Holiday Finale concluded this Sunday with the $50,000 Equiline Holiday Finale Grand Prix in the International Arena. Jordan Coyle of Ireland flew through the jump-off timers in 40.381 seconds to secure the win with Elan Farm’s Essenar Crixus, while Wilhelm Genn of Lebanon, OH and Van Gogh, owned by Wilhelm & Patty Genn, came in a close second after completing the jump-off in 40.76 seconds. Roberto Teran Tafur of Colombia and his Dena-Sienne rounded out the podium with a time of 39.47 seconds and four faults.

“He [Essenar Crixus] just turned 10. I’ve had him for about 5 months, so I’m still getting to know him, but he should be able to do some bigger classes and be very competitive. He’s definitely fast enough,” Coyle shared. “For such a big horse, he’s actually quite easy to ride.”

Course designer Anthony D’Ambrosio welcomed 45 entries to the first round, with only four returning for the jump-off. “I was lucky I was last to go, so I got to watch everyone. I actually thought I was a lot faster than Wilhelm [Genn], so I slowed down to the last jump which nearly caught me. It was a lot closer than I thought. I’m just delighted,” Coyle concluded.