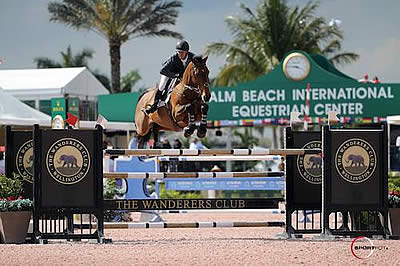 Course designer Alan Wade (IRL) concluded his week challenging the international competitors at WEF with 45 entries in the two-star grand prix and 11 in the jump-off. McCrea and Candy Tribble’s Special Lux completed the fastest of six double clear rounds in 36.74 seconds. Paul O’Shea (IRL) and Skara Glen’s Presence stopped the clock in 38.75 seconds to place second. Jonathon Millar (CAN) and Millar Brooke Farm’s Daveau finished third with a time of 40.89 seconds.

McCrea and the 13-year-old Irish Sport Horse gelding (Lux x Coille Mor Hill) have been partnered for almost four years and won the FEI World Cup™ qualifier in Bromont, Quebec, in July 2016, but the rider felt like his horse lost some form after that. He was happy to have the two-star division to compete in this week, and the pair also won the $8,000 Douglas Elliman CSI 2* 1.45m speed class on Thursday.

“It’s always a struggle when that happens – when you go from everything to nothing overnight,” McCrea stated. “Literally, I just backed right off him. Two weeks or three weeks ago was his first time showing in Ocala. He was second in the two-star there in the grand prix. Then I gave him a week off and came here, again just with the idea of showing in the two-star to get him confident and happy.”

Detailing his winning round, McCrea noted, “I was in the position today to go last, which is always in his favor. I had seen Paul go. I knew maybe I had a little bit more ground speed with my horse, and he maybe has a bit more experience than Paul’s on the rollback turns. He is super careful, so I am never afraid to gallop with him.

“His ride is a little different; he is very Irish,” McCrea said of Special Lux. “He loves to gallop. I think even if you look back at his first round, he was almost ten seconds under the time allowed. That is how he his. He wants to be able to gallop; that is his strength. He is very careful. I just have to let him alone, and let him jump.”

O’Shea was aboard a young mount in Skara Glen’s Presence, a nine-year-old Holsteiner stallion (Contendro x Nekton) that he owns in partnership with Skara Glen Stables and Michael Haydon, and was happy with both of his rounds.

“I was just delighted with my horse,” O’Shea stated. “He is just a nine-year-old. I have done four grand prix with him, and he has won two of them, and second now today, so I could not be happier. I just love him; he has been really consistent.”

O’Shea found the horse when it was six and showed him in Europe as a seven-year-old. He detailed, “I think he jumped in 24 rounds, and he was clear 19 times. He is just a fantastic horse. He does not really have a weakness. He is very scopey and very careful. He is a real fighter. He is a horse for the future. I think he is a horse that is going to do championships if I don’t get in his way, so I am delighted. When they have his kind of quality, it makes everything much easier. He has the raw materials.”

Remarking on his jump-off, O’Shea added, “It was for sure the fastest jump-off I have done with him. I went very quick; Jon was just faster than me today. If I was to do it again, I do not think I could have done anything different. Maybe to the last two, I could have been a little bit quicker, but I would not have been quicker than Jon.”

For his third place finish, Millar was aboard Daveau, a nine-year-old Dutch Warmblood gelding (Zento x Glennridge) that he has been bringing along for two years. The pair was also second in week seven’s two-star grand prix, and Millar has been pleased with his horse’s consistency.

“The last three two-star grand prixs, he was fifth, second, and now third, so double clean in all three,” Millar pointed out. “The addition of these two-star classes has been fantastic for a wide variety of horses and riders. It just gives everybody a little bit of a different option. It is fantastic to be able to take this opportunity and develop my horse.

“I could not be more pleased with him,” Millar continued. “I am just trying to teach him about turning and galloping, and things like that, without running his legs off here. He has always been a very consistent horse. I think he has a bright future, and I am just trying to develop him and give him the exposure here.”

Detailing his jump-off, Millar stated, “He does cover the ground really well. He is efficient, and quick, and turns really well. I think [the times were] pretty close, and that is what these classes end up being. It is where you can take your risks and what your horse’s sort of risk/reward situation is. Fractions of a second is what it comes down to, so overall I could not be more pleased.”

Jimmy Torano (USA) set the pace in the jump-off in 40.23 seconds to eventually finish fifth aboard Day Dream, owned by Jimmy and Danielle Torano. Laura Kraut (USA) and Cherry Knoll Farm’s Constable II upped the pace in 38.75 seconds to earn the third place prize. Lillie Keenan (USA) and Chansonette Farm’s Skyhorse followed with the fourth place time of 40.21 seconds. McLain Ward (USA) briefly jumped into the lead with a time of 37.56 seconds riding his own and Susan Heller’s Tina la Boheme, but was bested in the end. Third to last, Foster and Victor raced through the timers in 36.82 seconds.

“I think that I had an advantage, going later in the jump-off, and knowing how fast that everybody was going,” Foster said following her round. “It was one of those jump-offs where you just needed foot speed and you needed to take a little bit of an extra risk at some point. I know my horse obviously really well, since I have had him forever, and I knew that if I landed on stride one in that last line, I could probably get there in seven. I kind of opted for seven very fast strides instead of eight formal strides, but I have huge trust and confidence in my horse, and I knew he would get there. It turned out well, because if not, I do not think we could have won it.”

Even in the first round, Foster knew that she had the longtime partnership with Victor on her side.

“He is such an experienced and great horse that to jump one of these courses, even though they are difficult, you feel like it is easy for him,” Foster noted of the horse she has ridden for eight years. “That makes a big difference. There is a big margin of error I think, when you go into a class like that on a horse with that much scope and experience. That obviously is a huge advantage, and you feel a lot of confidence with that.”

Now that Victor is 15 years old, Foster and the team at Artisan Farms pick his classes carefully and try to keep the gelding’s schedule light.

“I was not even planning to do this class,” Foster laughed. “Victor’s owner, Andy Ziegler, has full credit for me even being in this class today. I had a time-fault in the WEF (Challenge Cup), and I was so mad at myself because my plan was for that to be Victor’s only class. If it were not for Andy, I never would have entered, so he has full credit for this win.”

Also competing in the International Arena on Sunday, Madison Goetzmann and Prestigious were victorious in the $10,000 Hollow Creek Farm Medium Junior Jumper Classic.

The Rosenbaum Mollengarden PLLC Large Pony Hunter division finished Sunday morning on ‘Pony Island.’ Augusta Iwasaki of Calabasas, CA guided Laura Barrett-Gurtis’ Caleche to win two over fences classes, place fourth in the other over fences round, and fifth in the conformation. The pair earned the championship honors with a total of 23 points.

Caleche, a ten-year-old Oldenburg Pony mare by Constantin, was imported late in 2011 and started her U.S. show career at WEF in 2012. The mare is currently stabled at Stefanie Mazer’s Forget Me Not Farm in Wellington, FL.

“She’s an awesome large pony,” Mazer complimented. “She’s beautiful, easy to take care of, and so sweet. It is a real pleasure to have her in the barn. She always jumps in great form and is a really classy mare.”

Mazer introduced Caleche to her current owners two years ago when they first purchased the mare.

“I actually sold her to her current owners,” Mazer continued. “She was for [Barrett-Gurtis’] daughter to show in the pony divisions. Her daughter outgrew ponies, and they sent the Caleche back to me at the 2015 Washington International Horse Show to sell. The mare has been doing really well during the winter circuit!”

Libbie Gordon of Statesville, NC captured the reserve ribbon aboard Valor. The pair received a second place ribbon under saddle, second in an over fences trip, and third in the conformation class. Valor, owned by Gochman Sport Horses, LLC, is a 13-year-old Welsh Pony gelding that Mimi Gochman previously campaigned.

The Winter Equestrian Festival continues in its tenth week of competition on March 15-19, 2017. For more information and full results, please visit www.PBIEC.com.