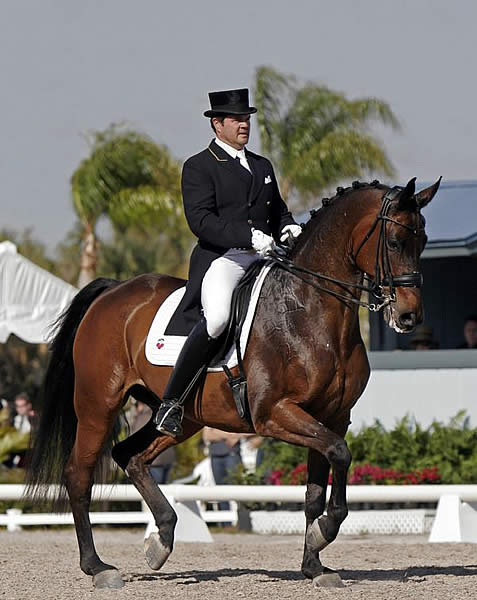 “We are very excited to be celebrating the Derby’s 30-Year Anniversary this year at the IHS Champions Park,” said Noreen O’Sullivan, Show Manager and IHS Managing Partner. “This year’s show is sure to be a highlight of the Florida season.”

The inaugural Derby, held in 1983 at the Hanover Horse Farm in Loxahatchee, FL, was the first to bring top international judges to Florida, when the Florida show circuit didn’t exist and the sport of dressage hadn’t really caught on in North America.

The Derby was the brainchild of Gisela and Howald Pferdekaemper, who arrived in Florida from Germany in the 1970s with a band of Hanoverian horses. They created a European-type show and Hermés donated the trophies, ribbons and the $5,000 prize for the winner of the Grand Prix, adding glittering parties and shopping to the experience.

“The Derby was one of the first dressage shows to offer real prize money and an exciting atmosphere,” Mary Anne McPhail, executive director of the Derby, said.

“It was such a big deal,” remembers Janne Rumbough, an adult amateur rider originally from Denmark who has lived in Wellington since the 1970s. “It has always had a wonderful atmosphere.”

The initial format of the Derby featured the top four riders swapping horses in the tradition of the Hamburg Derby in Germany.

“This was very exciting and brought many spectators to dressage,” Judge Axel Steiner remembers. “If riding up centerline at the Derby is accomplishment enough, imagine changing horses and having to do it again with someone else’s mount!”

This year marks the final year as an FEI judge for the legendary Steiner, who has judged the Palm Beach Dressage Derby for many years. “It was my first exposure to judging with European judges,” Steiner said. “This year is very important for me.”

“I have many, many memories,” he said. “However, my fondest memories go back to the early days when we officials got to sit in the Pferdekaemper’s great room after a day of judging, and had a chance to truly ‘talk shop’ just among us. Many of us actually stayed at the house, so these discussions lasted late into the night. Howald was there to make sure we never ran out of libation and Gisela fed us unusual delicacies like fried rattle snake, but also with more traditional German food. Some of the judges were Jaap Pot, Heinz Schuette, Col Thackeray, Jack Fritz, Edgar Hotz, Natalie Lamping and many more. We had a great time, and all learned a lot from each other.”

Steiner will retire after a stellar career watching competitors ride up the centerline, halt and salute.  He received his first national judge’s license from the American Horse Show Association (AHSA), which is now the United States Equestrian Federation (USEF), in 1968 and was promoted by the Fédération Équestre Internationale (FEI) to Official status (FEI-O, now FEI 5*) in 1988. He has judged Olympic Games, Pan American Games, World Cup Finals and many international and national competitions throughout the world.

Another famous judge, Anne Gribbons, agreed that the Derby is a special event. “I have been involved with the Derby either as a competitor or a judge since its very first ‘run,’ and I have enjoyed every minute of it,” she said.

The judging is a high point among those involved from the earliest years. “My favorite thing about the Derby is the high quality of the judges and the prestige it has if you win at this show,” Rumbough added.

Evelyn O’Sullivan, the Derby’s past show manager, agreed. “The Derby is the oldest competition to bring international judges and riders here. It continues to be a great pleasure for everyone in the industry. It’s a very peaceful and tranquil atmosphere.”

“One of the founding ideas of the Derby was to provide a top international experience along the lines of what is found in Europe,” she said. “We are very grateful to all of the Olympic-caliber riders who have supported the show for all of these years. It’s these riders and their special horses that make dressage so wonderful.”

“It was the premier show in Florida and even today is probably is still one of the most influential,” Steiner added. “What Devon is in the fall, the Derby is in the spring.”