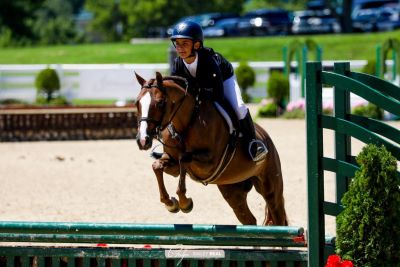 Lexington, Ky. – August 12, 2022 – Day four of The 2022 USEF Pony Finals, presented by Honor Hill Farms, welcomed blue skies, blue ribbons, and even more smiles. The Rolex Arena invited Medium and Large Green Pony Hunters for their final day of competition and the presentation of their respective division champions. At the conclusion of each division, overall scores were tallied, and the Grand Green Pony Hunter Champion was crowned under the Kentucky sunset and accompanied by proud trainers and families.

The sun was shining in The Bluegrass State Friday afternoon as Pony Jumpers took to the Claiborne arena to contest the chance to step on top of the podium in the Pony Jumper Team Competition. At the conclusion of two thrilling days of competition, it was Aundrea Hillyard, Katie Smith, Savannah Smith, and Linen Owens for Zone 3 raising their gold medals high. Joining the Gold Medalists on the podium were Lucy Wendling, Mary Elizabeth Ryan, Ellie Kao, and Reagan Voxman of Zone 10 with the silver. Zone 8’s Ryder Richardson, Haley Honegger, Zahara Henderson, and Isabella Uhrig donned the bronze.