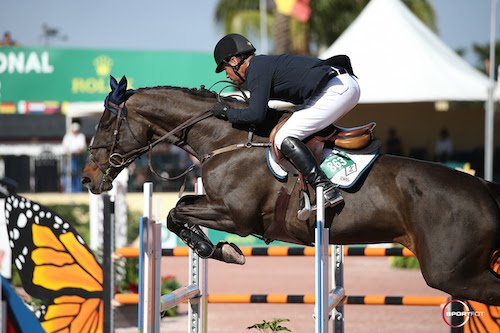 Ana Catalina Harris Cruz (MEX) set the track for Friday’s speed round in the International Arena at the Palm Beach International Equestrian Center (PBIEC), with 42 starters in the 1.40m competition and 11 clear rounds. Torano and Betagravin finished their course in 55.60 seconds. Lauren Hough (USA) and Willow Grace Farm’s Canasta Z placed second in 56.89 seconds, and Laura Chapot (USA) rode her own and Mary Chapot’s Thornhill Kate through the timers in 59.49 seconds to finish third.

“She has been great. I have ridden her in five classes so far, and she has won two and been third in another,” Torano detailed. “She is very fast, very careful, and seems like a really competitive horse.”

Commenting on his round, Torano stated, “Originally today, the plan was just to go smooth and set her up for Sunday’s 1.50m, but right as I was walking in the ring Missy said, ‘What the heck, let’s try to win it.’

“When I walked the course, I only walked half of it because that is all I was going to do for some training,” Torano continued. “I had to change my whole plan before I walked into the ring, but we did it. Her stride is so big that I can save a lot of time. I left strides out everywhere.”

Betagravin will jump her first big class on Sunday, and Torano sees more for her future.

“She’s probably more horse than they think they originally bought, but I think they can attempt some bigger classes with her because she seems to be doing everything we have asked of her,” he noted. “She is nice. She is in your hand. The biggest thing is dealing with her big stride, but you just have to know how to contain that.”

Julie Holzberger, of Fairfield, OH, and long-time partner Pure Giving triumphed in the Camping World Adult Amateur Hunter 50 & Older Sec. A. The pair finished first, third, third, and fourth over fences and second under saddle to secure the championship title. Lynn Rogers, of Baypoint, NY, and Blue Point settled for the reserve championship honors with a pair of sixth place ribbons and a pair of first place ribbons, all over fences.

Pure Giving is a 2002 Swedish Warmblood gelding that Holzberger has owned for six years. She credits much of her success to her trainers of 14 years, David Belford and Christopher Payne, and her focus on consistency.

“He’s so sweet and I adore him,” gushed Holzberger, who had a highlight win with Pure Giving at the 2014 Capital Challenge Horse Show. “He knows me like I know him. We’re in sync together. He loves to go out for grass and I love to graze him.”

Holzberger primarily competes at WEF in the winter and Kentucky in the summer. She balances her veteran mount with a younger horse, Pure Bliss that she shows in the 2’6″ division.