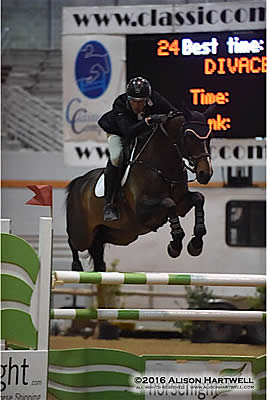 The $10,000 Horseflight Open Welcome kicked off the jumper action Thursday afternoon and saw a field of 26 horse and rider teams compete in the indoor stadium at the Jacksonville Equestrian Center in Jacksonville, Florida.

Allen Rheinheimer of Zionsville, Indiana, Course Designer and Technical Coordinator for the 2015 World Cup Finals, designed the course and set a first round time allowed of 90 seconds and second round time allowed of 45 seconds. David Jennings of Franklin, Tennessee in the irons of Masie McSwain and Full Circle Farm’s Blue Moon 22 were the first to go and turned in back to back clear rounds in times of 87.620 seconds and 41.261 seconds which set the new time to beat.

Tracy Fenney of Flower Mound, Texas and MTM Farm’s MTM Full House were the next horse and rider team to turn in double clear rounds, taking the lead and setting the new time to beat at 38.801 seconds. Donegue, owned and ridden by Emma Willsky of Aspen, Colorado, turned in a clear first round effort in a time of 83.105 seconds. Although they turned in a second round with a time of 39.963 seconds, four faults would see the finish in ninth place.

Aaron Vale of Williston, Florida and Thinks Like a Horse’s Spirit of Alena turned in a clear first round in a time of 82.948 seconds. However, eight jump faults and ten time faults in a second round time of 54.708 seconds would see them finish in eleventh place overall.

MTM Axel, owned by MTM Farm and ridden by Dorothy Douglas of West Bridgewater, Massachusetts, turned in the next double clear rounds in times of 83.146 and 41.734 which would see them finish in fifth place overall.

Chanel Du Calvaire, owned and ridden by Francois Lamontagne of Saint Eustache, Quebec, Canada, followed Jennings with double clear rounds in times of 86.230 and 43.934 seconds which would see them finish in eighth place overall.

Kyle Dewar of Ocala, Florida and his own Russell followed Lamontagne and posted a clear first round in a time of 83.527 seconds. Their second round in 46.942 seconds had eight jump and two time faults which would find them finish in tenth place overall.

Fenney returned to the arena, this time in the irons of MTM Farm’s MTM Como No. The pair turned in double clear rounds in times of 87.137 seconds and 42.609 seconds, respectively, which would see them finish in seventh place overall. 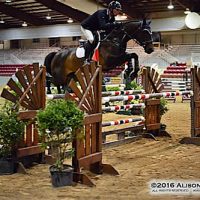 Amanda Flint of Long Valley, New Jersey and the Coverboy Group’s Coverboy followed with the next clear first round in a time of 86.599 seconds. Four jump faults and fourteen time faults in a time of 58.117 seconds would see the pair finish in twelfth place overall.