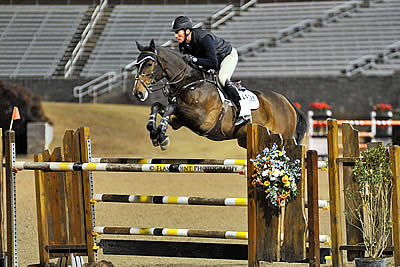 Billy the Kid flies with rider David Jennings over an oxer in the Olympic Arena with eyes on the win. Flashpoint Photography.

Forty-nine riders tackled last night’s $10,000 Open Jumper Welcome Class in the Olympic Arena during the opening week of the Atlanta Fall Classic.  Well known grand prix riders such as Patty Stovel, Derek Peterson, Quentin Judge, Kristen and Josh Vanderveen, Paulo Santana, Sarah Segal, Sarah Scheiring and Frances Land, to name a few, set out to win the class designed by International Course Designer Manuel Esperanza of Mexico City, Mexico.  But it was David Jennings of Full Circle Farm from Franklin, Tennessee, in the irons aboard Cory Olson’s Billy the Kid, who would steal the blue in the fastest double clean round of 71.486 seconds and second round time of 40.751 seconds, respectively.

“This class was a lot of fun,” said Jennings, who showed Billy the Kid thirtieth in the forty-nine horse line-up.  “I rode six [horses] and I’m really thankful that Derek [Peterson] and Patty [Stovel] were able to ride a couple for me too,” he said.

“I had some seasoned horses in here and some younger ones which had their first experience jumping under the lights,” he said. “It showed for them, but they need to get that experience and this is a great show to give them that mileage,” he added.

Quentin Judge of Wellington, Florida and HH Donnatella, owned by Double H Farm, were second to go in the class and the first double clear round, setting the time to beat for the class at 73.586 seconds  and 41.917 seconds, respectively, which was well within the first round time allowed of 74 seconds and second round time of 64 seconds.

Frances Land of Alpharetta, Georgia, riding her own Vieanne, was the next double clear round to go and finished in 69.795 and 42.050 seconds, respectively, which would land her in third place behind Judge.

Judge followed Land on his second mount, and looked to take the lead aboard Double H Farm’s HH Dark De La Hart.  His first round time of 69.674 seconds looked to accomplish that, but a second round time of 44.562 seconds would see him finish in sixth place overall.

Paulo Santana of Wellington, Florida turned in the next clear round in the irons aboard Santana Stables, LLC’s Atanja in a time of 68.329 seconds.  But a rail at the second to last fence in the jump off round would cost them four faults in a time of 44.562 seconds which would land them in tenth place overall.

Patty Stovel from Chester Springs, Pennsylvania riding her own Carigo Z was next to go and turned in double clear efforts in a time of 71.733 seconds and 43.893 seconds, respectively, which would finish the pair in fifth place overall.

Jennings was next to go, this time in the irons of Emily Short’s Grand Finale 3E.  The pair finished their first round in a time of 71.720 seconds, but a rail down at the first part of the combination in the jump off would cost them four faults despite their time of 41.310 seconds, which would see them finish in eleventh overall.

Jennings’ winning ride was his fifth horse, Billy the Kid.  Santana followed Jennings in the irons of Rafael Contreras’ Florence A in a fault-free first round of 72.022 and a clean second round in a time of 43.865 seconds.  A couple of seconds shy of the winning time, Santana and Florence A would finish in fourth.

“The course was tricky and some of these riders are really fast,” he said.  “Quentin is really well-mounted and he just gets better every time I see him ride.  Pablo Santana has some great horses here and the competition was really tough,” he said.

International Course Designer Manuel Esperanza brings with him his experience designing courses for Spruce Meadows, the Beijing games, and as an Assistant Designer for the 1996 Olympic Games.  He will be one of the course designers on the schedule for the Mississippi Gulf Coast Winter Classics.

The $10,000 Barry Lane Jumper Classic will wrap up this afternoon’s competitions in the Olympic Arena and looks to see about 51 riders tackle the course.  Tomorrow afternoon the $65,000 EMO Grand Prix will close out Week 1 at the Georgia International Horse Park.

It’s not too late to enjoy the last Classic Company Show of the year.  There is always something for everyone at Classic Company shows and the Atlanta Fall Classics are no exception.  So make sure to bring everyone to the Georgia International Horse Park next week and enjoy Classic Company’s world class customer service, beautifully decorated rings, big prize money, great events and fun for all!  Email Jonathan at jonathan@classiccompany.com or call the office at 843.768.5503.

Remember, you can also sign up for the Atlanta Fall Classic by visiting the Classic Company’s Official Service Partner, Equestrian Connect.

Equestrian Connect allows exhibitors to store their data one time, on the web, and then use that data to automatically fill out hunter/jumper entry forms across the country.  The service offers a free 45 day trial period for new members.  At the conclusion of the trial period, Equestrian Connect offers an annual subscription, or a “pay as you go” service.  The service allows exhibitors to save both time and money.  This is the one-minute online entry service that will help you get your entries in on time and you to the show!  There is no easier way to get your entries in today and the Classic Company recommends that you give it a try.

Whether you are a seasoned veteran or novice looking for a positive show experience, look to the Classic Company shows and join them at the Atlanta Fall Classic which runs through next week.  Anyone who has shown with the Classic Company knows what sets them apart from the rest:  Classic Shows are FUN!  Complimentary exhibitor parties, luncheons, Saturday pizzas and the friendliest show management team anywhere work hard to make your showing experience the best.  Classic Company never charges an add or scratch fee for those last minute changes and there is no office surcharge added for credit card payments.

The Classic Company is a USHJA’s Members Choice Award winner, recognized for producing top quality show jumping events in the United States.  For more information on the Classic Company, the Gulf Coast Winter Classics, the Southeast Medal Finals and their exhibitor-friendly, top quality hunter jumper events, please visit them at www.ClassicCompany.com or call them at 843.768.5503.  All sponsorship, marketing and press inquiries should be directed to Lisa Engel, Sponsorship, Marketing and Public Relations Director, at lisa@classiccompany.com.