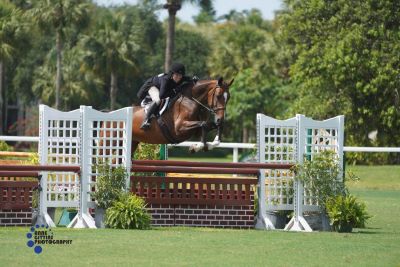 Wellington, FL – May 14, 2022 – The fifth and final week of the ESP Spring Series held its featured class for hunter competitors on the grass Derby Annex at Equestrian Village on Friday. Jennifer Bliss and Flight captured their second consecutive win in the $2,500 USHJA National Hunter Derby, presented by Equiline, after jumping to a two-round score of 179.

Deywi Rodriguez was the recipient of the Schneiders Groom Award following the $2,500 USHJA National Hunter Derby as the groom of the winning derby horse. As part of the recognition, Rodriguez was presented with a bag of high-quality grooming supplies courtesy of Schneiders Tack.

Derby action continued on Saturday with the $1,000 2’6”- 2’9” Hunter Derby presented by Score at the Top, which offered less-experienced horses a chance to test derby-styled courses. Topping a field of 12 competitors, Katie Giddings and Chitty Chitty Bang Bang captured the win.

In the USHJA Hunter 2’/2’6″ division, presented by 100X Equine, Ki-Juan Minors of Wellington, FL received top honors with Wiser Now, owned by Laura Ojemann. The pair championed the division after placing consistent performances in all five of the division’s classes, earning a first and a second-place ribbon, two third-place ribbons, and a fourth-place ribbon.

Keri Kampsen captured the tricolor ribbon in the 3’ Green Hunter division with Randee Cherner’s Eliot Du Banney. The partnership was awarded three first-place ribbons which included two over-fences classes and the under saddle, to accrue the most points towards the overall championship honors.