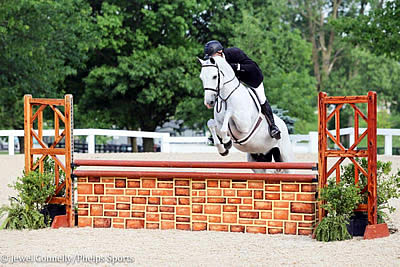 Out of twenty-five entries in the Stonelea ring, only the top twelve combinations who scored an 80 or above in the classic round were invited back to vie for top honors and a pair of luxurious Fabbri boots. Gogul had an almost flawless first round aboard the 9-year-old Dutch Warmblood gelding, Snowbird, receiving an 86 from the judges. He also received four additional bonus points for taking all the high options. The score was high enough to position Gogul in first place going into the handy round, but Winn Alden and World Affair were not far behind with an 89.

Heading into the handy round, Gogul had the advantage of going last in the order, but he knew they would have close competition. Victoria Colvin, who won the USHJA National Hunter Derby with Caliber during the Kentucky Spring Horse Show, was on track for another victory, rising to the top of the leaderboard with a high score of 92. As the final rider on course, Gogul was prepared with multiple plans after the trot jump at fence four. Calling upon the gelding’s bravery and natural jumping ability, Gogul guided Snowbird over all of the high options, earning them four extra bonus points. The pair received a score 90 from the judges, ensuring their victory in the class.

Snowbird, who has spent the winter showing indoors at the World Equestrian Center, only started showing outside last week at the Kentucky Spring Horse Show. During that first week under Kentucky’s blue skies, the pair placed fourth in the $5,000 USHJA National Hunter Derby. Gogul not only came into the ring prepared to win but he felt the added presence of his beloved friend, Ellen Veitch, whose memory was honored by spectators, riders and show organizers alike with ‘A Day in the Park.’ As he took his victory lap, blue braids standing out in Snowbird’s mane, Gogul reflected on what a perfect day it was to honor his friend who loved her home state of Kentucky and horses equally.