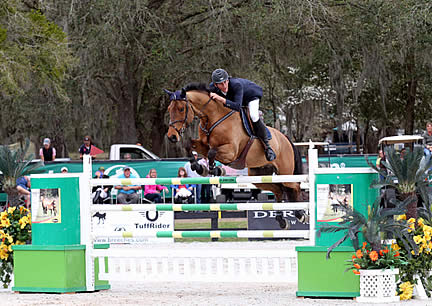 ©ESI Photography. Jared Petersen and Titus 2:11 on are a roll at HITS Ocala and picked up their second $50,000 grand prix win in a row this weekend

“I have to give all the glory to God. Without him none of this would be possible,” said a faithful Petersen after his victory. Petersen admits that he named his horse after a bible verse hoping that people would ask what the verse says – “For the grace of God has appeared that offers salvation to all people”.

Thirty horse-and-rider combinations showed up on Sunday primed for a course designed by Canada’s Danny Foster. A series of tests and challenges narrowed the starting list down to eight for the jump-off.

“I thought it was great sport today,” said Foster. “A course starts with just a sheet of paper, but when it’s all said and done, and the end result is an exciting class that rode well, with good horses and good riders, that’s what makes this all special. I think Jared rode great and he deserved it.”

Petersen admits that Foster’s course was both tricky and technical. “I don’t think it was as big as some of the other courses we’ve jumped, but there were some lines where I couldn’t really leave strides out where I would have liked, but it rode well and worked out great,” he said.

First to return in the jump-off was Laura Linback of Mundelin, Illinois aboard Woodrun’s HH Dauphin. Linback rode conservatively and concentrated on posting a clear round. She succeeded and set the Great American Time To Beat at 50.60 seconds. In the end, Linback’s clear round secured the third-place ribbon.

Andre Thieme of Plau Am See, Germany was next to show aboard his own Quonschbob. Thieme, the winner of the 2011 Pfizer $1 Million Grand Prix, was looking for his first victory this season and thought he might have it when he and Quonschbob shaved three seconds off the time to beat to take the lead with a clear round in 47.53 seconds.

Patty Stovel of Chester Springs, Pennsylvania and Carigor Z were next to show and were able to catch Thieme’s time in their own 47.50 seconds. Two rails, however, came down for eight faults and sat them fifth.

Petersen, the 20-year-old rider from Archer, Florida, was next to show and proved that he and Titus 2:11 have what it takes. They rode a neat and fast jump-off to set a new time to beat at 46.78 seconds, which would go untouched for the rest of the jump-off.

“Andre was really fast,” said Petersen. “I knew if I touched the reins anywhere then I wouldn’t make it happen. I did the five [strides] where everyone else did six, and I think that’s what really made it happen.”

Petersen and his nine-year-old Holsteiner received a year’s supply of free Strongid C 2X product for their victory, courtesy of Zoetis.

“We will put it to good use for sure,” said Jared’s father and grand prix veteran, Derek Petersen. “We’ve used Strongid in the past and it’s a great choice for deworming.”

Show jumping at HITS Ocala will enter the second half of AA-rated competition this week. The $25,000 SmartPak Grand Prix and the $50,000 Ring Power Grand Prix, both presented by Zoetis, return this week as riders from around the world continue to show at HITS Ocala with hopes of qualifying for the Zoetis $1 Million Grand Prix.

Rhode Island’s Katie Tyler and her own Seattle 6 captured the blue ribbon yesterday in the $5,000 A-O Jumper Classic Medium. The duo rode to the blue ribbon as one of 15 starters on a course designed by Danny Foster. Melissa Rudershausen and her own Ducati earned the second place red ribbon while Sherri Jameson and her own May’s News were third.