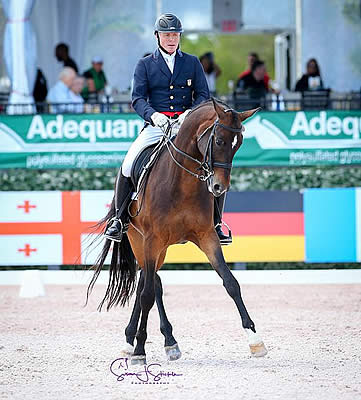 Wellington, FL — March 4, 2018 — It was the final rider who triumphed on the final day in week eight of the 2018 Adequan® Global Dressage Festival (AGDF) at Palm Beach International Equestrian Center (PBIEC) in Wellington, Florida. The USA’s Jan Ebeling scored 71.958% — the only plus-70% score — to land the Intermediate I Freestyle CDI3*, presented by ProElite®.

It was the second win of the week for Ann Romney’s 10-year-old gelding, his first having come in the Intermediate I CDI3* class.

In the Prix St Georges CDI3*, this small tour series’ first contest, Canada’s Tom Dvorak pipped Ebeling to the post on Carla Bahr’s nine-year-old gelding Cyrus, but Ebeling pulled out all the stops in the freestyle on Sergio Leone to regain the top step of the podium.

“He was awesome in there. He was ‘on’ in the I-1 already, and today he was even better,” said the German-born U.S. Olympian. “In the first test — the prix st georges — he’s always a little timid. Although he’s shown a lot, he’s always been like that in the first test. He’s a little tight and tense looking at the arena, but he was great today; super easy.

“This is a fun freestyle designed by Karen Robinson, who does all my freestyles and has done for many years,” added Ebeling. “It was actually designed for another horse that has very similar movement, who is not here. The CDI season is fairly new for ‘Santo’ — he used to be called Santo Domingo — so he’s now borrowed that freestyle for two weeks in a row and he’s doing well with it.”

Although only lightly shown in CDIs, Ebeling has been competing the Oldenburg gelding by Sir Donnerhall x Stedinger in national classes since he was five after sourcing him through Christian Heinrich in Bremen, Germany.

“We started showing him years ago at third level and we’re just about ready to move into grand prix with him now,” continued Ebeling, 59. “I haven’t done many CDIs with him and I want to take my time and do the small tour one more time, but he’s pretty much schooling the whole grand prix so I think maybe before we leave to go back home to California at the end of the season, I might put him in an Intermediate II or a young horse grand prix.”

Although there are plenty of competitive opportunities in California, Ebeling praised the Wellington circuit, saying: “My wife Amy and a friend of ours own a 16-horse ranch here; we felt that the Florida circuit is very competitive and it’s a fun environment. It’s horse heaven and rider heaven and I feel like I can OD on horses every day for three months. We also have a wonderful circuit over there in California, but this Florida circuit has been so established for so many years and it’s gotten bigger and bigger. The organizers have done such an amazing job — putting money into it — it’s turned into this animal that has a life of its own. It’s so much fun to be here; I just love it.”

In the pony division, 11-year-old Paige Hendrick recorded her second win of the week, topping the FEI Pony Freestyle on Otinio. Hendrick is the youngest American rider to gain the US Dressage Federation silver medal. Remarkably, she has already been out competing at prix st georges level. She is also the youngest rider to be selected for Robert Dover’s 2018 Christian Kennedy Future Stars Scholarship program.

Otinio is a 20-year-old New Forest pony who is trained to grand prix level and can perform 17 one-time changes as well as piaffe and passage. The family made the trip down from their home in Rhode Island. Otinio is familiar with Florida as he competed at the AGDF numerous times between 2012 and 2015 under his previous rider, Asia Ondaatje Rupert (USA), and won most of the classes he contested.

Hendrick and Otinio led the freestyle class with 66.575%, just 0.075% ahead of second-placed Scarlett Hansen (CAN) and Reve De Glatigny.

Vanessa Creech-Terauds, daughter of Diane — scored a double, topping both the young rider freestyle, sponsored by Yeguada de Ymas, and the under-25 grand prix freestyle, presented by Diamante Farms. The Canadian rode Devon L, who was unbeaten in both his starts in week eight, to 67.8% at grand prix level, and Rob Roy, by Rubin Royal, to 70.9% in the young riders’ class. Both horses are owned by Leatherdale Farms.