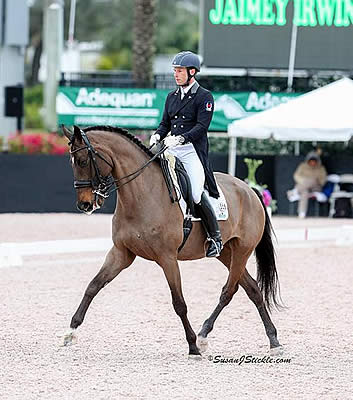 Wellington, FL – January 29, 2017 – Jaimey Irwin (CAN) and Donegal V captured another win on Sunday in the FEI Intermediate I Freestyle, presented by Chesapeake Dressage Institute, on the final day of week three, presented by U.S. PRE Association, at the Adequan® Global Dressage Festival (AGDF).

Week three concluded with a win for Jaimey Irwin (CAN) and Donegal V, a 2008 Dutch Warmblood gelding (Johnston x Remy x Gribaldi) owned by Team Irwin Supporters Group, in the FEI Intermediate I Freestyle, presented by Chesapeake Dressage Institute, with a score of 75.475%.

“He felt like he was dancing with the music which was a lot of fun, and I was really happy with him overall,” said Irwin of Donegal V and his ‘80s inspired Freestyle ride. “He felt really good today. I thought that it was a really nice ride.”

The pair earned another victory earlier in the week in the FEI Prix St. Georges – CDI 1*, presented by Chesapeake Dressage Institute.

Commenting on Donegal V’s future, Irwin said, “I’d like to do a few more of the small tour competitions this season, but he’s training and working toward the Grand Prix so ideally I’d like to try I-2 and then maybe Grand Prix at some point at the end of the season.”

Coming in second to Irwin was Nicole Levy (USA) and Floratina, a 2008 Hanoverian mare by Fidertantz, owned by Kate Sanders, with a score of 71.400%. Third place was awarded to Kathy Priest (USA) and Fredensdals Zig Zag, a 2008 Danish Warmblood gelding (Blue Hors Zack x Kristiansmindes Elektra xBlue Hors Don Scherzo) owned by Priest, with a score of 70.275%.

Competition at AGDF resumes February 9-12 with the CDI 5* presented by Diamante Farms; CDI 3*, presented by Wellington Equestrian Realty; and CDI 1*, presented by Engel & Völkers. Next week at the AGDF show grounds, the $100,000 Land Rover Wellington Eventing Showcase will take place on February 3-4. For more information on that event, visit www.PBIEC.com. For more information and to see a full list of results from AGDF, please visit www.globaldressagefestival.com.