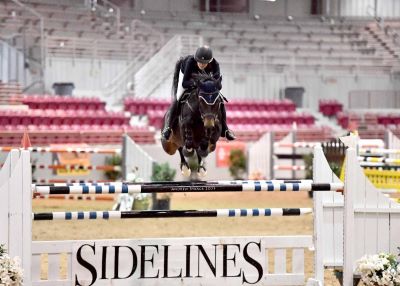 Tracy Fenney of Flower Mound, Texas and MTM Farm’s MTM Dolce Vita rode away with the win in the $35,000 Glen Kernan Golf and County Club Grand Prix, besting a field of twenty-three horse and rider teams over a course designed by Paul Jewell of Windsor, New Jersey.

The first round was set with a time allowed of 89 seconds and only seven would qualify for the jump off round.

Dorothy Douglas of West Bridgewater, Massachusetts in the irons of Nina Moore’s MTM Cedrik was the first to tackle the jump off round with a time allowed of 49 seconds. The pair left all the rails up, but their time of 52.584 seconds earned them four time faults and a fifth place finish.

Fenney and MTM Farm’s MTM Apple, winner of the Week I $35,000 Sidelines Grand Prix, presented by EMO, followed in the jump off order and turned in a clear round in 44.772 seconds, setting the new time to beat.

Brian Feigus of Colts Neck, New Jersey and MTM Farm’s Igor Van De Heibos followed in the order and with eight jump faults in a time of 45.381 seconds, finished in sixth place.

Jordan Peterson of High Springs, Florida and Derek Petersen’s Diamant’s Legacy followed Feigus and their fault-free jump off round in a time of 43.232 seconds would take the lead and set the new time to beat.

The lead was short lived, however, when Fenney and MTM Dolce Vita followed in the jump off order. Their fault free round in a time of 43.052 seconds took the lead and set the new time to beat.

Kaitlyn Williams of Paoili, Pennsylvania and her own Cassio Melloni sat in the enviable last to go position. Their time of 50.353 seconds earned them four time faults and the pair would finish in fourth place, leaving Fenney and MTM Dolce Vita victorious and Petersen and Diamont’s Legacy in second. Fenney also took home the third place ribbon with MTM Apple as well as a ninth with MTM Reve Du Paradis.